The June 2022 Blarney & District Person of the Month is Team Medic to the International Mixed Ability Rugby Tournament (IMART) Ray Dennehy. IMART is the ‘World Cup’ for Mixed Ability rugby clubs, and is the only international event where people of all abilities play together in the same unadapted, mainstream 15-a-side game abiding by World Rugby Laws. Following the huge success of the inaugural tournament in the UK in 2015, and the 2017 event which was held in Spain, the event moved to Cork for 2022. Four years in the making, Ray and his colleagues at Sunday’s Well RFC fought off stiff competition from other would-be host countries, waited out a global pandemic, and spent endless hours working tirelessly with the EU, IRFU, Munster Rugby, Cork City Council, IMAS, and others in an effort to bring this event to Cork. Originally scheduled for June 2020, the event was played in Cork earlier this month. In the region of 1000 players both with and without disabilities, from 28 teams and 14 different countries came together to play rugby under same World Rugby laws as the XV a side game with only minor adaptations such as uncontested scrums. This year’s event is made extra special by the fact that it will host the first ever Women’s Mixed Ability Rugby tournament also. The Mixed Ability Model encourages social inclusion by removing barriers to participation for people who feel unable to join mainstream grassroots clubs or groups due to physical or learning disabilities, mental health issues, size, shape, age, prolonged inactivity, or a perception of ‘not being good enough’. It is hoped that the IMART and MAW events in Cork this year will enhance interest, participation and interaction of people of all abilities in the sport across Ireland and beyond, and help to build new connections between grassroots clubs, educational institutions, communities and local authorities. The staging of the event in Cork marks a significant achievement for Sunday’s Well RFC, who coordinated the bid, and acknowledges the leading role which the Club now plays in championing the sport. Ray described as ‘a man who works tirelessly off the field more so than on, often doing more than required,’ has put trojan work into the staging and running of the event, and said that he hoped ‘all the participants have a good time, the ethos of mixed ability is spread far and wide and that the people of Cork give one hell of an Irish welcome!’ 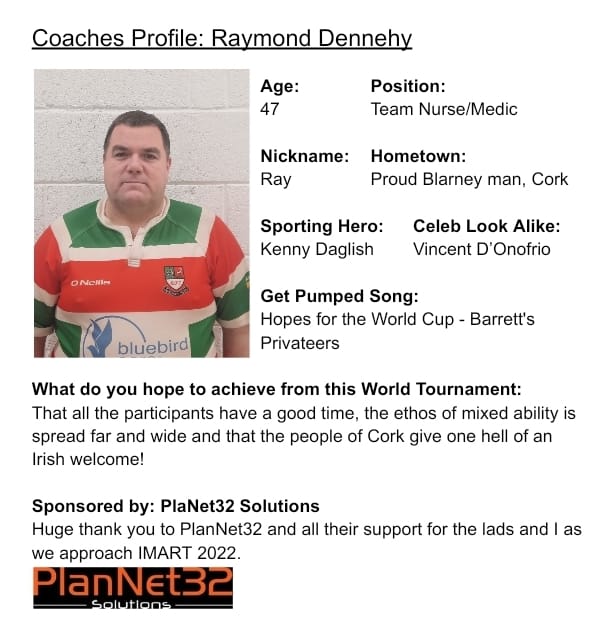