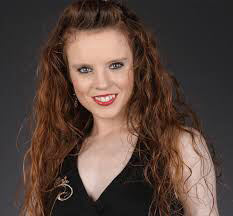 Raised on a family farm in Dripsey Mags McCarthy is an eye-catching and captivating vocalist, dancer and multi instrumentalist. Mags began her musical arts pursuit as a four year old studying Irish dancing. Catering to an undeniable musical hunger, Mags expanded her curriculum to explore and learn a variety of dance styles as well as musical instruments with her primary focus on violin. Courted by the world renowned Irish dance troupe, Rhythm Of The Dance, the UCC student became a global performer almost overnight. The young singer / songwriter has since canvassed more than 40 countries, performing before millions as a principal lead in the dance troupe and as a solo-touring artist.

She received welcoming invitations to perform before notable dignitaries such as President and First Lady Michelle Obama at the White House, the President of Ireland, the Mayor of Shanghai, members of the British Royal family, the young Prince of Luxembourg in Chelsea, England and the European Parliament in Brussels as well as numerous majestic locations including Dublin Castle, Lismore Castle, Waterford Castle, Blarney Castle, Ashford Castle and Blackwater Castle.

Since laying stake in Nashville, Tennessee in 2018, the former high school music teacher has taken center stage at the Wildhorse Saloon, the Hard Rock Café, 12th & Porter and many other historical Music City venues. In the two years before the world closed down, her show schedule tallied more than 600 shows.

Mags, currently at home in Dripsey writing a new single, experienced massive success last year with ‘Light of a clear blue morning’ written by Dolly Parton and is regularly featured  on radio and television both in Ireland and abroad.