The US tourist who was airlifted from the top of Blarney Castle after going into cardiac arrest issued an emotional thank you to the people who saved his life, wrote Eoin English in the Irish Examiner David Motte, 59, from North Carolina, said he has forged a special bond with the Irish people, and said he and his wife, Joy, will never be able to thank everyone enough. “I probably shouldn’t be here right now, but the fact that I am is testimony to the great work those people did on Friday,” he said. “The fact that everyone was so prepared… I am ever so grateful. I owe my life to them.” Speaking from his hospital bed in Cork University Hospital (CUH) he said, “I, we, have been trying to thank everyone. But I don’t think we will ever be able to thank them enough. “I cannot tell you how caring and gracious the people have been. The people we have met are just so wonderful. “We were in dire circumstances, and we have just been so touched by the outpouring of support, and by the love and concern people have shown. “We have fallen in love with Ireland. I have formed a special bond with the people of Ireland.” The couple arrived in Ireland on their first visit here, to explore Joy’s Irish heritage, and were a few steps from the top of Blarney Castle when David collapsed. Castle staff, who are trained in first aid, gave immediate assistance before Jeremy Downey, a volunteer with Blarney Community First Responders who was working nearby, arrived on scene, followed soon afterwards by National Ambulance Service paramedics. They administered CPR and used a defibrillator and revived him. However, given the location and David’s critical condition, an airlift was called. The Shannon-based Irish Coast Guard helicopter, Rescue 115, winched David from the top of the castle and transferred him to a waiting ambulance, which rushed him to CUH.” David was released from CUH in time to enjoy the last few days of his holiday before returning home, vowing to return and kiss the Blarney stone!’

It’s a wonderful day when a man become seriously ill, yet leaves the village alive thanks to the excellent response from staff at Blarney Castle, those on the scene who started CPR with immediate effect, and our hard working first responders, paramedics, coastguard and fire brigade.

Siobhan Hogan, centre, pictured with Blarney Community First Responders, was instrumental in the dramatic save of David Motte recently at Blarney Castle. Her speed in getting the AED to David, and confidence of use, was pivotal in his outcome. Like all Castle staff, several more of whom attended on the day, she is fully proficient in CPR, AED use and advanced first aid techniques. 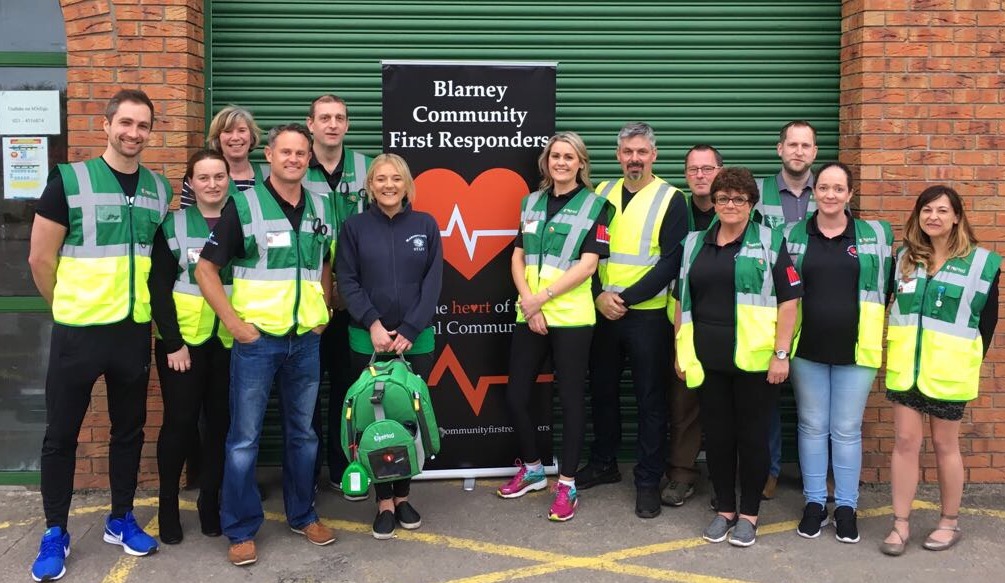 As his wife Joy, said, ‘You would think the top of a castle would be the worse place to have a heart attack, yet it turned out to be the best!’