Blarney United under 18 Division 1 Champions! Blarney Under 18s clinch league title at home to Brooklodge/Riverstown with a  4-0 performance that was worthy of being crowned Champions. Going in to this final game of the season for both teams a draw would have been enough to see Blarney lift the title, where as a victory for Brooklodge /Riverstown would see them crowned Champions all to play for on the day. Blarney started very well with Eric Baxter and Martin O’Sullivan cool and composed at the heart of the defence and it was O’Sullivans ball from the back that released striker Sean O’Brien on 20 minutes to break the dead lock O’Brien raced through one on one with the Brooklodge keeper who narrowed the angle but O Brien lobbed with a classy finish. Blarney continued to dominate the first half but it was not until just before half time that they added the second goal. Blarney were awarded a corner and David Murray found Sean Cronin at the edge of the box and his first time strike flew through the crowed penalty box and into the net. Blarney continued the second half as they finished the first with Ray Murphy and Cronin pulling the strings in midfield and Chief tormentor Sean O’Brien up front proving to much for Brooklodge/Riverstown to handle, O’Brien went on to score two more goals to finish with his hat trick and the deserving Man of the Match award. Blarney did get a late scare when Brooklodge/Riverstown were awarded a late penalty but keeper and Captain Luke Conroy guessed correctly to keep a clean sheet a round off a fine team performance. Manager Neil Twomey paid tribute to his players after the game and a league title was a great way and very deserving of his team who worked hard throughout the season and kept believing right down to the last game. 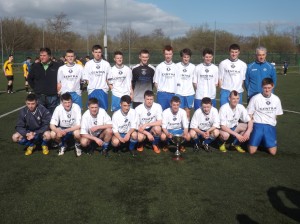