1916 Commemoration. On March 15th Berrings National School marked the centenary of the 1916 Easter Rising. The day was packed full of music, drama, poetry  and even our very own modern day proclamations. The school community gathered in the hall to watch as each class performed. Fifth class began with a beautiful rendition of the Foggy Dew on their tin whistles.  Everyone was moved by the play written and performed by the sixth class pupils. The play saw the children re-enacting the events of 1916. The boys and girls of 4th class launched their centenary song ‘Live On’ which they wrote, produced and performed themselves. They have entered the song into a National competition. We wish them the best of luck. 2nd class presented and read out their ‘modern day’ proclamations in which they outlined their wish for modern Ireland. The raising of the flag was the highlight of the day. Amhrán na bhFiann was sang with pride and accompanied by our very own bag piper. It was a day that we will all remember for many years to come. 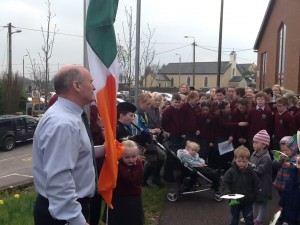