Charles Glavin, Managing Director of Blarney Window Systems, is our March 2016 Blarney Person of the Month. Charles was the voluntary project manager for the refurbishment of Penny Dinners, which underwent a complete overhaul at the end of 2015. The Little Hanover Street premises was renovated for this year’s At Your Service Christmas Special, which aired on RTÉ on Christmas Day. When Caitriona Twomey, who runs this fabulous charity, cut the ribbon at the new look premises she said, “I’m just blown away. Everything is new here. New floors. New walls. Insulation. It’s incredible. You can feel the heat in here. We could never feel that before. It was always a very cold building.” Charles and other volunteers worked literally around the clock, seven days a week to get it done on time, starting at 5am some days. Over 20 local businesses volunteered their time, materials and labour, and Cork Penny Dinners reopened in a bulding which had been completely cleared of asbestos and dry lined, with a new roof, windows and doors, and a fabulous new kitchen. Charles was at the helm of this project since the first meetings, and speaking at the time said, “Over the years, Blarney Windows has been raffling off old materials and donating the cash raised towards the Cork Penny Dinners. “When we initially looked at the windows, they were dreadful. They were typical, old windows that had bars on the inside; it looked like a prison. So, we donated new windows and doors to the project, but the more we looked at the building, the more things we noticed needed fixing.” Charles admitted that the renovation project had its challenges. “I am delighted with the work, it will be totally transformed. Although, I’ll say it here, I’ve never worked so hard in all my life, nor have any intention of working that hard, again! But, once I put my teeth into something, I’m not going to stop. “I was stunned by the amount of people who assisted in the project so willingly, it’s astounding. He concluded by thanking the countless local businesses that contributed their time, labour and material to the project, saying “Cork Penny Dinners will now be housed in a functioning structure that will be around for a long time.” Congratulations Charles on your fabulous voluntary commitment to this wonderful Cork charity. 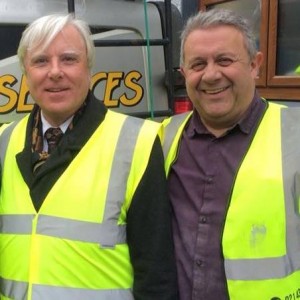