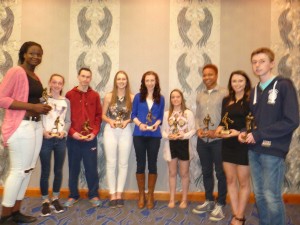 Our members turned out in style for our annual Awards Ceremony which was held in the Oriel House Hotel on Friday 29th May 2015 to celebrate another successful year in Basketball. Our Chairman Ken Quinn acted as MC for the announcement of the Club Member of the Year Awards at all age groups. The winners were as follows:- Girls U14 Jennifer Nyagaya, U15 Ava Lordan, U16 Rachel Moore, U18 Girls Amy O’ Sullivan Division 2 Emer Roche, Senior Clodagh O’ Driscoll Boys U14A Boys Aaron Brady, U16A Boys Stephen O’ Shea, U16B Boys Jack O’ Connor, U18 Boys Eliot Asemoto Following the presentation of the awards some of the audience were willing to show that their skills on the dance floor were as good as those on the basketball court in the Boys v Girls dance off! While the girls were a little bit shy about their moves, the boys were not backward about coming forward and wowed the crowd with their talent to the music of ‘Let It Go’ from Frozen. All the photos of the Award Ceremony can be viewed on our website.