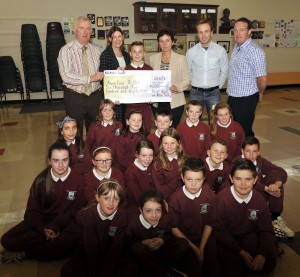 Scoil an Athar Tadhg community in Carraig na bhFear have done it again. The pupils have been producing a charity CD over the last number of years with the proceeds going to very worthy charities, and this year’s CD contains two tracks featuring the children singing, accompanied by the wonderful Crystal Swing and was launched last April by Cork Ladies Football Manager, the one and only Eamonn Ryan. There was an understandable sense of pride and achievement among all at the school last week when the proceeds, €6,580, were presented to Valerie O’Riordan of Anam Cara and Martina Barry of CRY. Anam Cara offers support to bereaved parents and CRY offers help to surviving siblings. Teacher Joe Hanafin, who has been the driving force behind this annual event, welcomed Valerie and Martina to the school and he thanked the children and his colleagues and fellow coordinator, Philip O’Brien, for their efforts in making the project a success, which indeed exceeded their expectations. He also thanked Crystal Swing for their generosity with their time and talents and the general public for their wonderful support. Valerie O’Riordan thanked the children and staff for selecting Anam Cara as one of the beneficiaries and said the project coordinators deserved tremendous credit for undertaking such a project at a time when the charity sector was going through some challenging times. CRY representative, Martina Barry, told of the peace of mind she and her family got as a result of the help offered to them by CRY following the sudden death of her beautiful fourteen year old daughter, Lydia.