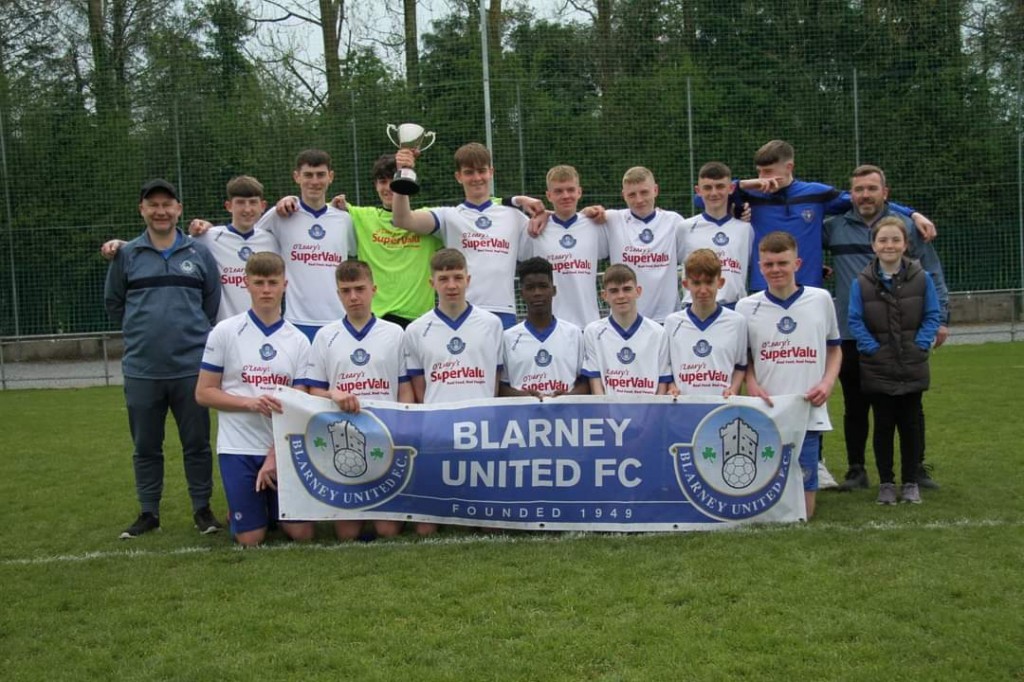 What a year for Blarney United both on and off the pitch. This was the first normal season following on from the pandemic and it was great to get back to playing football. Blarney United had 8 teams competing at Adult and Youth levels in the 21/22 season. Our Senior team finished 2nd in their league and gained promotion back to the MSL Senior Premier division, while squad member Martin O’Sullivan was selected to play in the UEFA Regions Cup and on the Ireland Amateur Squad who took on Ireland U20’s. Our first Junior team finished a very creditable 3rd in the MSL Junior 1st Division, had a great run in the John Hayes Trophy and made the final of the Junior Super Cup at Turners Cross. Our second Junior team also had a strong finish in their league and played in a very unique Super Cup game – Blarney United J1 v Blarney United J2. In the Cork Youth League all our teams performed very strongly in their respective leagues with our U17 Premier Team winning their league in a memorable night in Carrigaline! Three of our U18 Premier team members – Nathan Davis, Cathal McCarthy and Gavin O’Sullivan were selected to represent the Cork Youth League who won the National Youth Interleague competition. Moving into the Schoolboys League, with 11 teams from U12-U16 and younger teams playing non-competative games it was a very busy season! Our U16 team won the Division 1 league and also made it to the U16 Local Cup final where they performed admirably. The U14 Premier Team also made it through to the National rounds of the schoolboys FAI Cup. Daniel McAuliffe from our U12 Division 1 team was selected to play on the Cork Schoolboys League representative team in 2022. Our Schoolgirls section continues to grow at an amazing speed. We had 6 schoolgirl teams competing in the CWSSL from U11-U17 and also entered teams in the SFAI Girls National Cup at 3 levels. Season highlights include the U13 Team winning the CWSSL Plate and our U14 Team’s great run in the National Cup to get to the last 16. Former U15 Premier player Shauna Sheehan, who is now a Cork City FC squad member, represented Ireland in an U15 friendly and also played on the Irish Schools team that won the annual tournament involving Ireland, England, Scotland and Wales. Blarney United players Amy McCarthy and Alice Murphy played on the Cork Gaynor Cup U13 team. They are also attending the FAI Centre of Excellence and are on the Cork U14 team for the U14 Gaynor Cup, currently taking place. Our own Scott Forrest is part of that coaching team, while Kim Forrest played with the Cork U13 Inter League team this season as well. The Academy also returned this season with over 320 boys and girls aged between 6 and 11 training every weekend with a very successful Soccer Sisters Easter Camp and 3 FAI Summer Soccer Schools Camps planned for this summer. Success is not just measured on the pitch – this year saw our U18 team finish their Youth League career and of the 16 team members 14 of them have been there since the very start! Now that shows commitment to the team, game and club! Also off the pitch there was the publication of the fantastic club history book by local writer Richard Forrest “Blarney United – A Never Say Die Outfit”. The successful book launch in the Castle Hotel was attended by a great number of club members, past and present, and invited guests. We were also invited to take part in Wellness Week in Scoil Chroi Iosa and had a fantastic time meeting all the students and teachers. A big thank you to our Club Sponsors Supervalu Tower for sponsoring well needed healthy snacks and hydration that day! Sadly this year we lost Paddy Murphy, one of our clubs founding members. May he rest in peace. In May, many of our club members took part in the welcome return of Darkness into Light, remembering those who are never far from our thoughts. On behalf of everyone at the club we thank all the managers, coaches, players, volunteers, sponsors and those who keep our club facilities in such great condition for their efforts this season. See you all after the Summer Break! For club updates, fixtures and results follow us on Facebook, Instagram and Twitter!