Congratulation to Blarney who were outstanding in Cork Premier Intermediate County Final with a historic victory over Castlelyons on a scoreline of 1 – 20 to 0 – 15. Their performance of style, steel and resilience saw Mark Coleman crowned man of the match and lead to not one, but two, victory parades around the village! 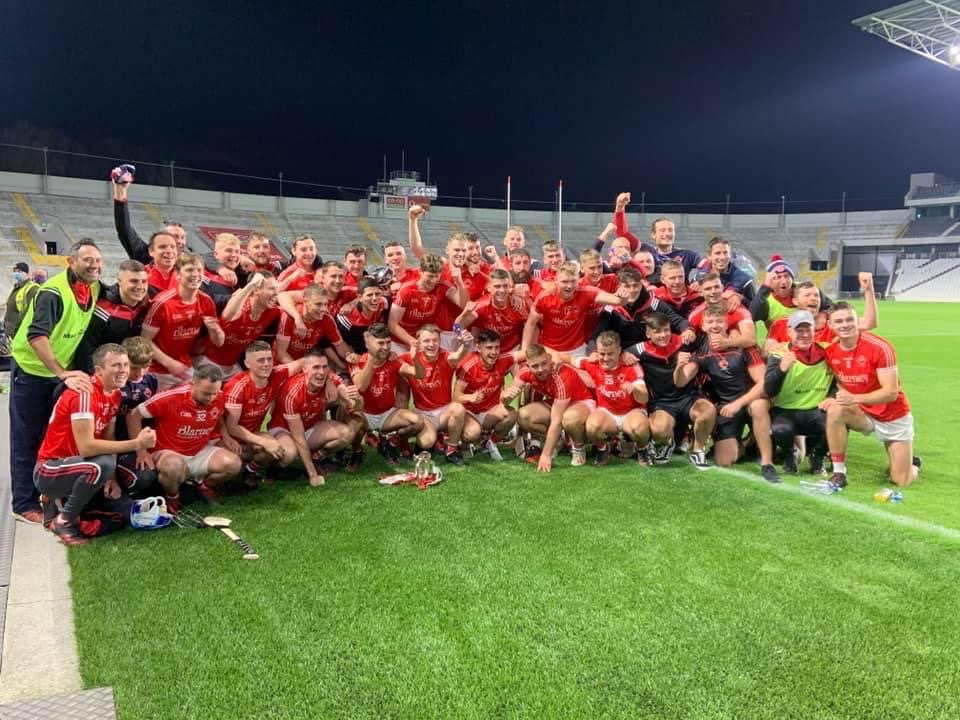 As Therese O’Callaghan reported in The Irish Examiner. “Blarney will take their place in senior hurling ranks following their deserved Co-Op Superstores Cork Premier IHC triumph in Páirc Uí Chaoimh on Saturday night This was an in impressive performance from the mid Cork side, the highlight of which was a virtuoso display from county star Mark Coleman. The midfielder rightfully scooped the man-of -the-match award, excelling from both open play and freetaking to finish the night with 14 points. They turned the tables on Castlelyons, having lost to them in the group stage. “Castlelyons taught us a lesson the first day,” said Coleman. “We had to ask ourselves a lot of tough questions the way they beat us. We just said before this game, leave everything out there. I think 1-to-15, everyone left everything on the pitch. We turned it around. It is always easier learn more in defeat and that is what we did. We looked at that game and it was always in the back of your mind to get one over them.” He also had a word for his inter-county teammate Colm Spillane who agonizingly was forced off with a hand injury in the first minute. “It is very disappointing for Colm. I haven’t seen him. I hope he will be alright. I will maybe talk to him over the next couple of days and see how he is getting on. That was a massive blow.” Without question, Spillane’s departure had a devastating effect on Castlelyons and they never recovered from it. With the exception of the opening point from Castlelyons chief scorer Michael Spillane, Blarney quickly got on top. Two Coleman points and one from Shane Barrett edged them in front. At the first water-break, they were 0-6 to 0-3 up. Declan Hanlon wore the number 12 jersey, but the wing-forward spent most of the hour giving a helping hand to his hard-working half-back line of Alan McEvoy, Peter Philpott and Joe Jordan. He certainly made his presence felt. It was turning into a lively contest when the other two Spillane brothers, Michael and Anthony, pointed to leave just one between them. And their goalkeeper Jack Barry made a great save, diverting a goal shot away to safety. Crucially, Blarney took up the running again. Philpott fed Patrick Crowley for a point, there was one from Padraig Power and three from Coleman to stretch the lead to six. Alan Fenton and Coleman exchanged white flags to leave Blarney leading by double scores at the change of ends, 0-12 to 0-6. Castlelyons did have a decent opportunity for a goal in the 24th minute and despite the best effort of Michael Spillane, they could not convert Castlelyons restarted with a Michael Spillane point. But they were hit with a goal a minute later, Patrick Crowley setting up their dangerman, Power. And the Castlelyons challenge grew ever greater. With the breeze to their backs, Blarney kept the scoreboard moving, three on the trot from Coleman (2) and Power. Ten minutes into the second-half, the advantage extended 1-16 to 0-8. It was a daunting task for Castlelyons, and while other teams might have folded, they never gave up. They struck seven points to Blarney’s one during a highly productive 15 minute spell. Centre-back Niall O’Leary, who was now operating further up the field, got one as did Anthony Spillane. And when Michael Spillane landed his tenth point, the gap was cut to five. A Mark O’Leary point was the sole response for Blarney, 1-17 to 0-15. Five minutes of normal time remained, and there were four minutes of additional time announced. Crucially though Castlelyons didn’t score again. Blarney took over once more with Barrett extending the lead before Coleman landed one from a ’65 and one from play to wrap up the win. For 23-year-old joint-captain Sean Crowley, this was a day to remember. “Myself and (Peter) Philpott are joint-captains. We are best friends. We have been friends since we were about two years old. This is a young team. It means the world to us. Watching the lads in ’08 and ’09, we always wanted to get back to those heights. Last year we lost to (Fr) O’Neills by two points in the semi-final and that was tough because they went on and they won the final.”