Earlier this summer the students and staff of Rathduff National School launched a fantastic CD. They were helped along by some local friends who included Fr. O’Lionsigh, Connie Moynihan on Piano accordion, Paul Sheehan on banjo, Ann Burns on bodhran and Carmel Barry-Murphy on guitar  The CD consists of a lot of old favourites including Galway Girl, Dilin O Deamhas and the Dingle Regatta. It also includes Michael Kennedy’s hilarious song ‘The Silage and the Maize’ on which the pupils accompanied him. It was launched on the day with the help on Tom Kenny and is available in shops and outlets in the Grenagh and Courtbrack areas. All proceeds go to the Rathduff National School School Building Fund. 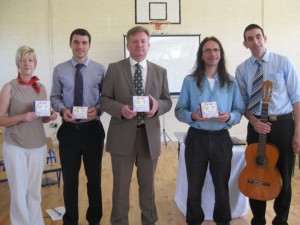