Three years ago Stephen O’Brien thought he might die while awaiting a double lung transplant but he has defied the odds to become a Cork sporting success story. Local man Stephen arrived home to a hero’s reception after claiming two bronze medals at the recently held European Heart and Lung Transplant Games. The cystic fibrosis sufferer won cycling and badminton medals as part of an Irish team that travelled to Vilnius, Lithuania, for the event. Two-and-a-half years ago, Stephen underwent a 12-hour double-lung transplant and was in a medically induced coma for several days. Prior to the operation, he was using an oxygen machine almost all day and was eventually put on a machine which basically breathed for him. The surgeons who carried out the transplant found Stephen’s lungs were so badly damaged, he may have only had a few weeks left to live. He left hospital three weeks after the operation and returned to work at TK Maxx five months later. He has recently completed the 180km Ring of Kerry cycle and crowned his recovery by claiming two medals for Ireland in Lithuania. On his return home, Stephen was greeted by family and friends and members of the Cork branch of Cystic Fibrosis Ireland. Cathy Carlton of Cystic Fibrosis Ireland said, “We’re very proud of Stephen. He is a wonderful young man.” And so say all of us. Congratulations Stephen! 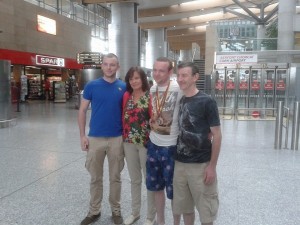