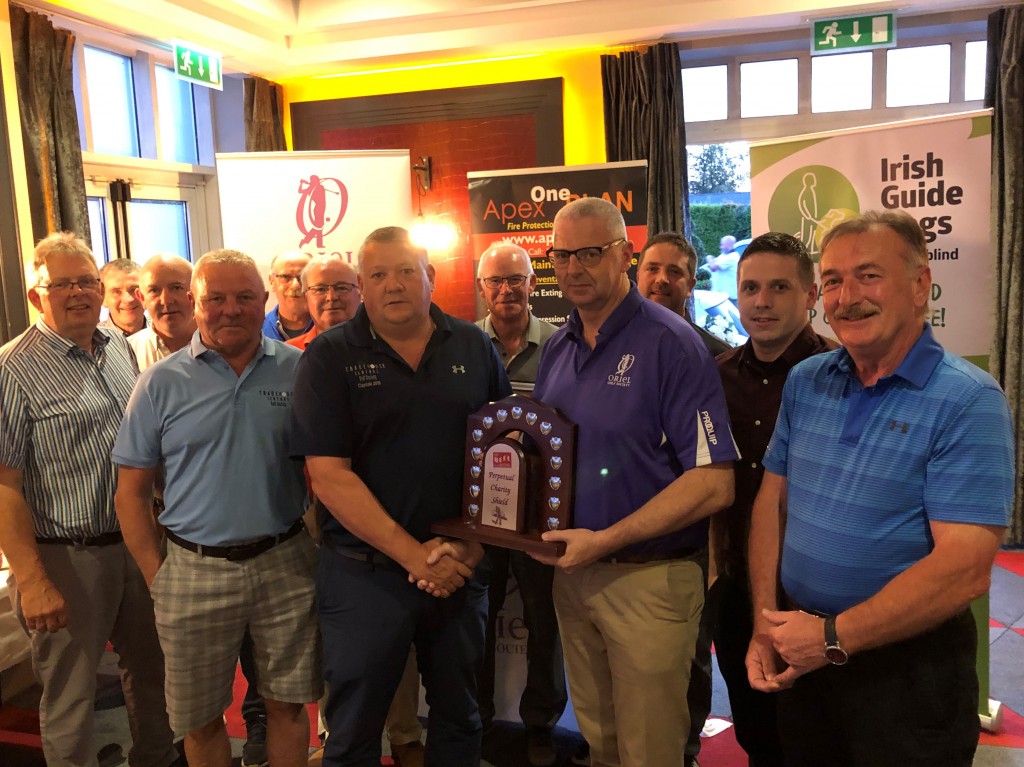 in Macroom Golf Club. The Oriel House Hotel Golf Society hosted the event this year and were joined by Healy’s Bar Ballincollig GAA Club, Mary O’Connell’s Bar, Tradehouse Central and Balllincollig Rugby Club. All the societies sold raffle tickets for a weekend away for two nights bed and breakfast and one evening meal for 2 people in any of the Talbot Hotels which was donated by The Oriel House Hotel. Second prize was an Irish Jersey signed by Roy Keane. All proceeds went to this years nominated charity Irish Guide Dogs for the Blind, who received €3520.00. On the golfing front Dermot O’Shea Tradehouse Central Golf Society had the best individual score and was presented with his prize by Tom Butler of Apex Fire Ltd who sponsored the prize as well as Longest Drive which was won by David Keogh (The Oriel Golf Society) and Nearest to Pin which was won by Billy O’Brien (Healy’s Bar) The Winners of this year’s competition was Tradehouse Central whose team consisted of Keith Stafford, Dermot O’Shea, Padraig O’Brien, Jerry Walsh, Pat Kenefick, Jimmy Deane, James Stafford, Shane Murphy, Jim Nolan and Michael Lillis At the prizegiving in The Oriel House Hotel the perpetual trophy was presented to Keith Stafford of Tradehouse Central. Our sincere thanks to The Oriel House Hotel for their generous support, Apex Fire Ltd for their sponsorship, to all those who supported the raffle. Finally a very sincere thank you to Cathal and his team in Macroom Golf Club for their professionalism, courtesy and assistance in making the event the success that it was.