The parishioners of Donoughmore enjoyed a wonderful weekend of 50th Carnival celebrations, which started Thursday 18th July, with the official opening by Minister of Agriculture Michael Creed, who congratulated the parish on the long tradition of the carnival and the community spirit which is evident in Donoughmore. Maurice Brew was MC on the night and gave a detailed history of the carnival and Mary Wallace, Community Council Chairperson, thanked the volunteers past and present who have contributed to the community. Donoughmore native Cllr Michael Looney, representing the County Lord Mayor, recounted his memories of the carnival with pride. Present also were Cllr Eileen Lynch, Cllr Martin Coughlan and Aindrias Moynihan TD. A warm welcome was extended to the members of the first carnival committee who were instrumental is starting the first carnival in Donoughmore, Chairman, Cannon Michael Harrington, Secretary, Noreen Corkery and Treasurer, Noreen O’Regan. A great evening of chat, laugher and trips down memory lane aided by the carnival memorabilia on display continued into the night with refreshments being served by the local catering committee. On the pitch on Thursday night there was a very big turnout for the Fancy Dress with competitors marching around the pitch following the Ballingeary Pipe Band who really enhanced the event. McCormack’s amusements provided hours of fun for all throughout the weekend. Friday and Saturday night saw the revival of inter-townland skittle and wellington throwing competitions, the Car Treasurer hunt was very successful and the Teddy Daly Memorial Soccer match provided an entertaining game for spectators. Carnival Bingo saw the very popular local man Denny Lyons win the Jackpot game to tremendous applause. Ladies football is a long standing tradition at the carnival and this year the U10s girls donned their jerseys and held inter-club blitz. One of the highlights of the weekend was a sell-out concert by Sean Keane who entertained a packed community hall where he got a rousing reception from those who had travelled from far and wide to hear him. His performance was preceded by a superb performance by a local group of talented musicians. Regrettably the weather on Sunday was not ideal but many events still went ahead despite the terrible downpours and muddy conditions. The All-Ireland Tug of War competition went ahead even with the atrocious conditions under foot. The vintage exhibitors arrived from early morning to showcase their fabulous wares but unfortunately had to leave without doing their usual parade due to the appalling conditions. Macra Craft Competitions went ahead as did the egg tossing competition and skittles and the young scouts of the 11th Cork Cloghroe Scout Group also braved the elements in their activity area. The indoor events on the day were a big attraction. The indoor 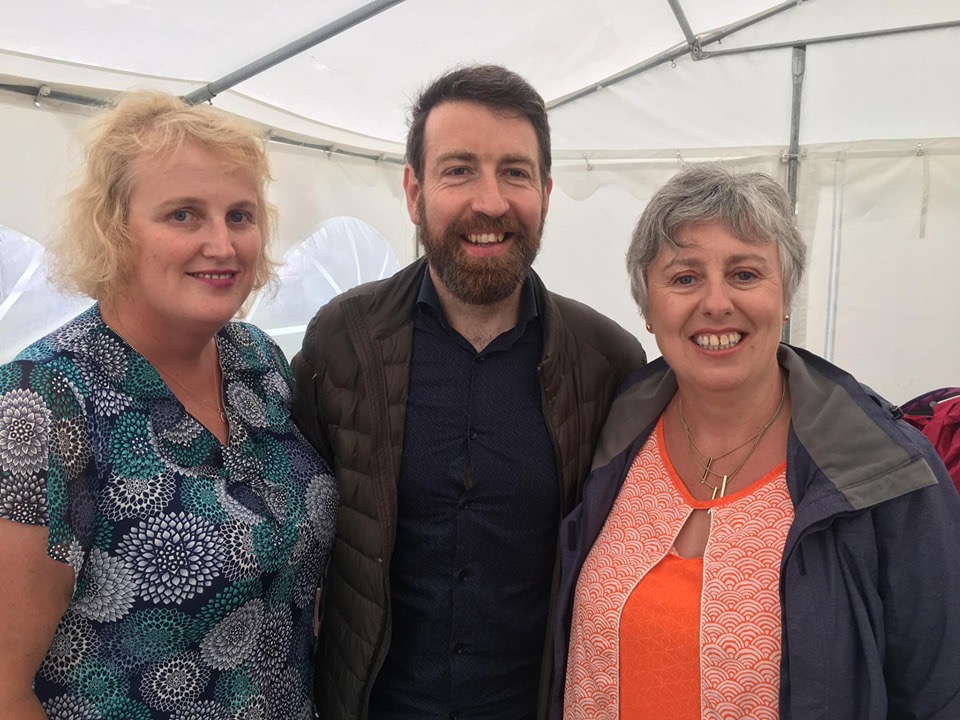 bowls and baby show in the complex drew large crowds where patrons were also able to view a very interesting exhibition of memorabilia from past carnivals. The Wellness Tent, which was a new addition this year was very popular with people waiting in line to get a chance to experience various therapies. The local art group also displayed many amazing paintings, showcasing their remarkable talent. The comedian/columnist, Colm O ‘Regan, was a huge hit in the Tea Tent and kept a large audience in stitches with readings from his novel ‘Anne Devine’ as well as many ad-lib comments and stories. Despite fear that the tent might collapse from the downpours outside, many fans queued up to get their books signed and to get their photos taken with Colm. On Sunday night proceedings kicked off with the St John Forde Match in which the U-10 boys were defeated by the U-12 girls. While the younger patrons had the time of their lives on the merries, a BBQ accompanied by music from The Rogues provided brilliant entertainment. A full house with lots of banter for our own ‘Live at the Marquee’. The 50th Carnival concluded in fitting style with an amazing fireworks display that could be seen from miles around, roll on the 51st Carnival!