Our under 8’s hosted Eire Óg at home on Pitch 3 in early June. It was an evening of great excitement for the girls in their first game this year despite the rain and it was fantastic to see the girls enjoying their night of football. Well done to everyone who braved the weather both the girls and parents and thank you also to all the coaches for all their hard work.

Our under 10 group played 3 teams in the last month or so. First we hosted Grenagh at home on Pitch 5. It was a busy evening where the girls were delighted to get the chance to play some football. Then it was off to Bishopstown where our 4 teams got to play 4 games – what started out as a cold damp evening turned into a deluge by the 3rd game but both groups gallantly played on through the heavy downpour. Thanks to Bishopstown for hosting and to all the girls, coaches and parents for braving the weather. Our last game this month was against Ballygarvan who were hosts on a lovely sunny evening. It was brilliant to see the hand passing and movement of the girls as they are showing great improvements over the last few games. With Summer Mid Cork Blitz’s planned this group will be hoping for plenty more football.

Our under 12’s group have been keeping busy these last 6 weeks or so. The coaches have worked very hard with this group over the last 6 months and this year we entered 2 teams in the Mid Cork U12 League. Our Green Team had some fantastic games in the last few weeks. There was a cracker of a game on pitch 3 against Ballinora where both teams played their hearts out with some lovely football, great determination and fierce excitement for the supporters. Ballinora shaded it in the end with a 1 point win, Final score Ballincollig 6-5 Ballinora 4-12. This was then followed by game against Naomh Abán in Ballyvourney. Again this was a closely fought game but Naomh Aban finished stronger to take the win by 2 points. Then it was off to Donoughmore where the girls played some lovely football with great movement and came away with a convincing win. This then lead to a league playoff game against Grenagh which was at home on Pitch 3 in mid June. Ballincollig were delighted to come away with a good win in that game which qualified them for a place in the Mid Cork Semi Final against Ballygarvan. Again we had great excitement and support for this team of girls who never give up. However Ballygarvan proved too strong on the night Our Pink Under 12 team were also busy these last few weeks. They travelled to Nemo Rangers where they suffered a narrow loss, then it was onto Eire Óg where hopes were high of a win and thankfully all girls played their part to come away with a 2 point win in the end. Happy days. This then lead to a Mid Cork Semi Final game against St Vals. Again hopes were high of win but St Vals were just too strong on the evening. But once again the girls never gave up fighting and playing to the end. Well done to all the girls who have shown huge determination along with some fun and laughs along the way. The club is very proud of the two under 12 teams and how they have played through their league campaign. Thanks to the coaches Daithi, Kevin, Cormac, Eamonn, Cathal, Eric and Cormac who have worked so hard with this group. Thanks also to the parents who help out at training and with the jerseys. A few weeks off now for the summer and County Championship to look forward to in the Autumn.

Ballincollig Ladies Football Club are delighted and proud that the winner of this year’s Belle of Ballincollig Festival is Amy Bowdren who was representing Ballincollig Ladies Football Club. Amy was captain of our Minor County Championship Winning Team in 2018 and is a fantastic leader both on and off the field. Well done Amy and have a fantastic year. The belle selection topped off a great week of activities which included the annual duck race in the Regional Park, table quiz and 5k run. Well done to the organising committee on another successful event. One of Amy’s first functions was to call to Scoil Mhuire for their last day of school football this school year. The girls were delighted to meet Amy and other team members of the County Winning Minor Team 2019.

Cork Ladies Football are running summer camps which are taking place in a number of locations around the county. These camps are run by Orla Farmer, Cork Senior Ladies Footballer and details are available on our facebook page Ballincollig LGFA. 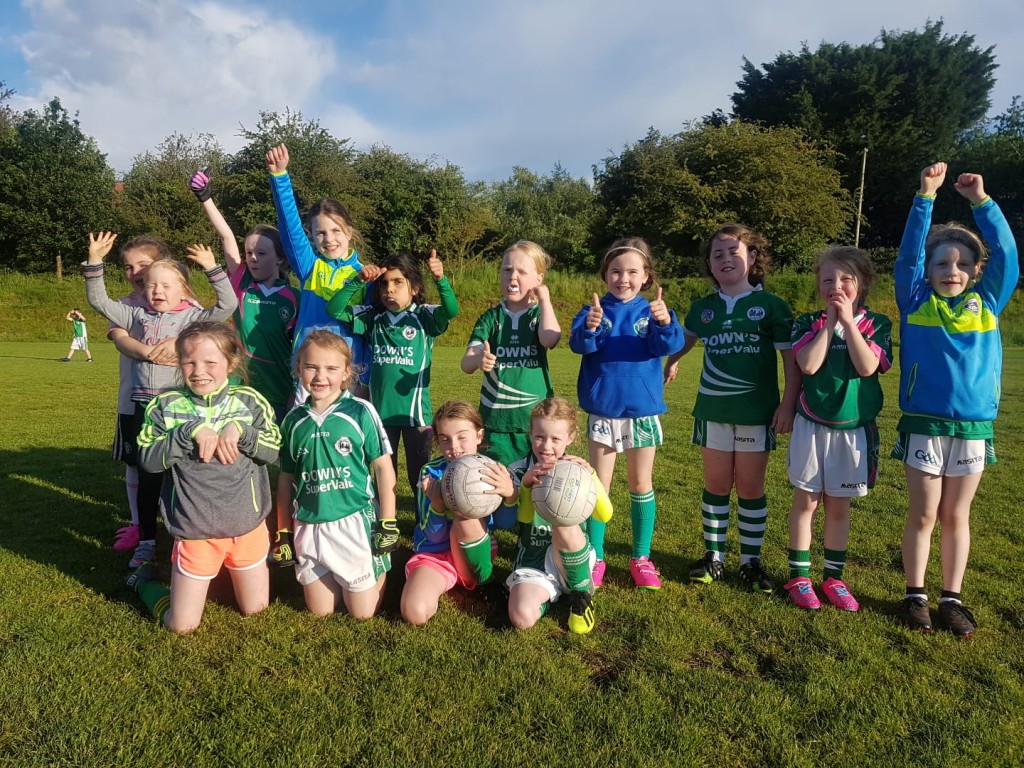