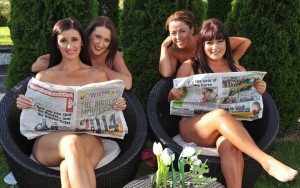 “A WHITECHURCH woman is lifting her community’s spirits with a tasteful nude calendar in support of three local women affected by cancer. Michelle Twomey came up with the idea, inspired by the film Calendar Girls, in support of three local women, all of whom received a cancer diagnosis in the last three years. The calendar, which the group hope to release this September, will be shot by Lisa McCarthy throughout the month of August. Funds raised will be donated to the Irish Cancer Society and Action Breast Cancer. Women modelling range in age from late thirties to late forties. They include Michelle along with fellow locals Carol O’Leary, Kathleen Hegarty, Rachael Hendley, Jule  Buckley, Charlotte O’Sullivan, Camilla Shaw and Jenny O’Driscoll. “We wanted to show our support rather than commiserate with those impacted by cancer,” Michelle explained. “Anyone can comment on how awful the disease is or throw a sympathetic look someone’s way, but that doesn’t require any energy or really help anyone. Doing something that really scares us shows how much we care and hopefully it will provide the community with a much needed lift. It also sends a message to people that they are not alone. Baring all isn’t easy when you are the mother of five children, but it’s nothing compared to the battle people who are seriously ill face everyday,” she said. The group experienced what Michelle said was unprecedented goodwill from local businesses who all sponsored a month each in return for advertising on the calendar. “The one thing I’m really nervous about is shooting the month for Riverview Eggs considering the size of the eggs!” she added.