“We would like to nominate Edward Healy to be the next person of the month for Blarney. Ed is the proprietor of Edward Healy Garage, Model Village Tower, Blarney. Ed, with the fantastic support of his wife Deirdre, has done tremendous charity work through his involvement with Blarney Vintage Club. A club member since 1992, Ed took over as Chairman in 2006. To date the club has raised more than €15,000 for various charities, with one of their main beneficiaries being the Cork branch of The Alzheimers Society. Under his stewardship the club also ran the Chris Pardoe memorial run for 5 years. The Club recently hosted a successful quiz night for The Cork Branch of The Alzheimers Society and plans are well underway for the Blarney Vintage Charity run on the 19th July, which will also benefit the same charity. Ed and Deirdre ran the successful ‘Blarney Vintage Show’ for four years, an event which brought both prestige and business to the village. We think he deserves to be Blarney Person of the Month with the hope he will be Blarney Person of the Year.” 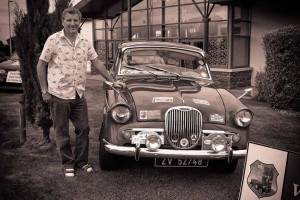