A new lease of life has come to popular local hotel, leisure centre and golf club Blarney Golf Resort which employs more than 100 local people. The four star hotel was recently purchased by well known businessman Tom O’Gorman. Mr O’Gorman saw the potential in this magnificent local property and is looking forward to investing more than half a million euro in the next five months in the hotel and leisure centre. Talking to The Muskerry News, Manager Conor O’Toole thanked all their local customers, leisure centre members, and golfers for their support and loyalty over the past few years and said how much he was looking forward to the planned refurbishment in all areas of the business. The hotel will also now be opening all year round, a move that will be welcomed by its’ loyal local customers. There has been a big and very exciting change in the kitchen also, with the appointment of Ciaran Brosnan as their new head chef. Ciaran, originally from Tralee, trained in Rockwell college and has worked in senior chef positions in both Australia and closer to home. He has held the position of Head Chef in some of corks best known hotels including The Ambassador, The Rochestown Park Hotel and SilverSprings. Ciaran brings with him a wealth of knowledge, experience and new ideas. 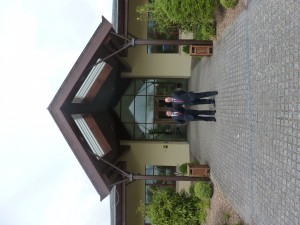