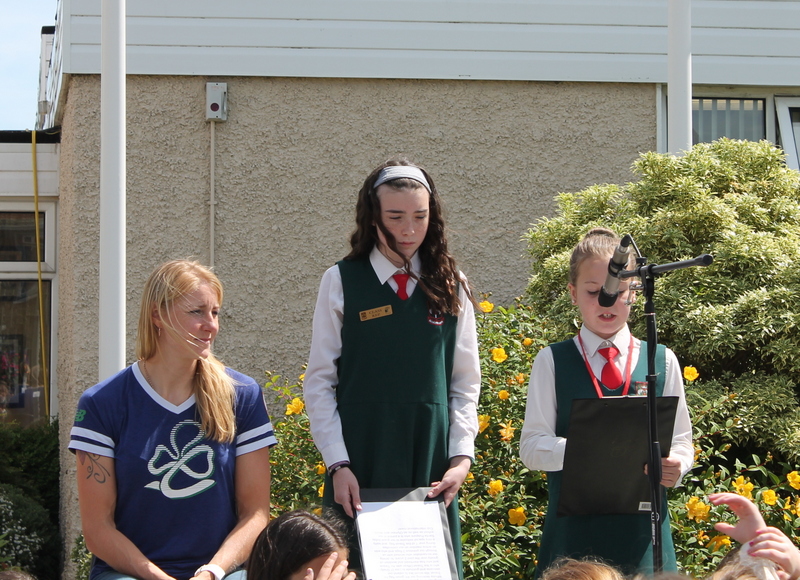 It’s not every day you have an Olympic athlete in your school but Thursday June 21st was one of those special days to remember in Scoil Mhuire when Olympic athlete and current World Rowing silver medallist Sanita Puspure came to the school to help raise their 4th Green Schools Flag. This flag was for travel and for reducing their carbon footprint to help tackle climate change. The day’s celebrations began with some of the pupils demonstrating their scooter and bicycle skills that they had learnt during their cycle safety course, Sanita was then serenaded by the whole school performing a medley of songs. Following this, two pupils who are members of the Green School Committee spoke about the work involved in earning the 4th Green flag and the importance of finding alternative methods of travel. Sanita spoke to the pupils about the importance of being up on your feet and remaining active and even gave them a few tips on how to improve their rowing skills, before fourth class pupil and Sanita’s daughter, Daniela, added to this very special occasion by presenting her mum with a bouquet of flowers. Then came the main event, the raising of the flag which is now flying proudly outside Scoil Mhuire before the arrival of the ice cream van, with some of the 6th class girls pouring their own ice cream cones!