After months of preparation, Whitechurch Macra na Feirme’s drama team brought the coveted title back to their club after winning The National finals. Whitechurch performed the one act play ‘The Proposal’ by Anton Chekhov and the cast were John O’Sullivan, Catriona O’Connor and Donal O’Sullivan. The play was set in the late 1800’s in Russia and deals with complicated subjects such as love, land and dogs. The Whitechurch cast were brilliantly directed by Eltin Griffin and his talents were rewarded on the night when he received the award for best producer. The set and costume designer was Catherine Foley. Donal O’Sullivan’s acting skills were equally rewarded on the night when he received the award of best actor for his ability to perform as a man of a nervous deposition suffering from palpitations. 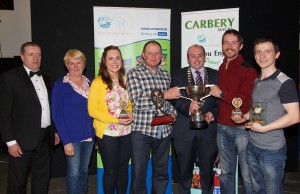