Fittingly, as plans get underway for the sixth annual Blarney in Bloom, which takes place on Sunday July 9th, Adam Whitbourn Head Gardener of Blarney Castle Estate is this month’s Blarney & District Person of the Month, following many nominations. Adam Whitbourn has many years experience as a professional gardener and has been Head Gardener at Blarney Castle Estate since 2010. His mission statement when he took over as Head Gardener at Blarney Castle was that he wanted ‘to make the gardens as famous in their own right as the castle’. Blarney Castle gardens are of significant historical importance and like any garden, if they are not constantly developed, they fall into disrepair very quickly and less welcome visitors like brambles and scrub take over. Indeed this is exactly what had happened in several parts of the estate and Adam was faced with the challenge of breathing life into these glorious gardens once again, a challenge which he has risen to and surpassed, the gardens are magnificent, and receive much local, national and international attention. There is so much to see in these gardens it is difficult to take it all in but thankfully there are information signs in many of the more significant trees and plants of interest for visitors and locals alike. And the work never stops as the development of Blarney Castle’s gardens continues in 2017, with Adam revealing plans for two new areas; a new Jungle Garden is to be created in an overgrown area adjacent to the existing Tropical border and, following a successful collecting trip in Northern Vietnam last November, there are plans in place to develop a Vietnamese woodland garden using wild-collected specimens. Adam was part of a group of four intrepid horticulturalists, including Rory Newell also from Blarney Castle gardens, who continued Ireland’s rich tradition and travelled to Northern Vietnam on a plant hunting expedition, in an area close to the Chinese border. The expedition was a joint project between Botanic Network Ireland and Blarney Castle & Gardens. Strict rules and guidelines must be adhered to, and Adam secured a permit from the Vietnamese authorities to collect seed. In conjunction with Blarney Castle Estate Adam also runs two events during the year that benefit local charities, their annual open day for Cork Simon which has raised more than €15,000 to date, and Blarney in Bloom, the proceeds of which are donated to Irish Guide Dogs for the Blind. Now in it’s sixth year, Blarney in Bloom Garden Summer Fair takes place on July 9th this year, and along with specialist plant nurseries, garden talks, traditional arts and crafts and a farmer’s market there will also be a fun dog show. Entry to the fair also includes access to Blarney Castle’s extensive ground 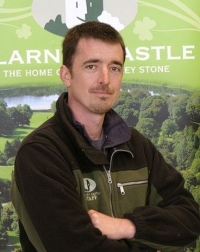 s and gardens including the famous Poison Garden, Fern Garden, Rock Close with its wishing steps and the witches stone, woodland and riverside walks, cafe and children’s play areas. As one journalist said of Adam, “Creating gardens as famous as one of the most famous castles in the world is as big a challenge as you can get — but Alan Whitbourn just might get there.”