Golf Classic. The Blarney GAA Golf Classic takes place on June 15th and 16th at Blarney Golf Resort. Once the action on the course concludes on Friday there will be a social night and prize-giving in the Castle Hotel, with food and entertainment provided. This event is open to everyone, not just club members. See blarneygaa.ie for more!

Darkness Into Light. Blarney GAA Club was proud to host the first Blarney Darkness into Light 5k walk/run on Saturday the 6th of May. There was a huge crowd in attendance and it was truly heartening to see such magnificent support for a great cause. The event would not have been possible without the tireless efforts of the organisers, with particular credit due to our own Martin O’Shea. Well done everyone!

Underage Round-Up. The u11 footballers acquitted themselves really well at the John Kerins Cup qualifiers at Tank Field on May the 27th. Our u12 hurlers have been busy with hurling and football league games this month, taking on Whitechurch and Eire Og. The u13 hurlers narrowly lost out to Inniscarra in the league on Friday the 12th of May, on a scoreline of 4-7 to 5-2. The u14s have been exceptionally busy this month between their regular hurling and football league games and the Feile. They’ve been performing really strongly over the course of May, winning almost all of their matches this month. Well done to everyone involved! The minor hurling team kept up their 100% record in the P1 league with a comprehensive win over Sarsfields on May 2nd in Blarney, having previously registered wins over Douglas and Bishopstown. Exam season means a break from GAA for some of the panel but the non-exam league kicked in for those lucky enough not to have exams this year!

Club na nÓg round-up. Club na nÓg is in full swing, catering for boys born from 2007 to 2012. There is a great buzz down the pitch every Saturday morning where they receive expert guidance in learning the skills of our games. Our u8 team have been busy recently, with blitzes against Delanys and Inniscarra. The u9 team played Mallow in the league, winning out in front of a great crowd of supporters. The u10s have also had a good month, beating Ballygarvan in the hurling league on Saturday the 6th of May.

Camogie round-up. The Junior C team are off to a strong start to the season, picking up some great wins in the league. The future is also looking very bright, with the girls of Scoil Croí Íosa claiming the Sciath na Scoil title with a win over Minane Bridge at Páirc Uí Rinn on Tuesday the 23rd of May.

Premier Intermediates. The Premier Intermediate hurlers had a relatively quiet start to May after their championship win over Watergrasshill late in April. They were back in league action on May 25th, taking an away draw against Carrigaline on a scoreline of 1-19 apiece. They were on the road again a few days later, travelling to Kilworth for another league game. In the end the lads came up just short on a scoreline of 1-17 to 0-15. The next round of championship is unlikely to take place until late June at the earliest.

Adult round-up. May was a difficult month for some of the adult teams in the club, with agonising championship defeats for the Junior A footballers and hurlers. After a strong league campaign the footballers approached their opening round game against Donoughmore on the 12th of May with confidence. However, injuries in the week before the match robbed the team of a number of starters and several more were forced off early in the game. The lads still battled manfully but lost out by 2-13 to 3-7 in the end. The will play Clondrohid in the back door game in a few weeks. The Junior A hurlers also tasted opening round defeat, coming up against a determined Iveleary side on the 28th of May. In a game littered with frees Blarney lost out by 3-12 to 3-10. The Junior B hurlers have continued their championship preparations with a number of league and challenge matches over the past few weeks.

Congratulations to Mark Coleman. May the 21st was a proud day for the club, as Mark Coleman became the first Blarney player to start for Cork in a championship match, togging out at wing back in Cork’s pulsating win over Tipperary at Semple Stadium. Mark was one of the leading lights in an excellent team performance, earning a Man of the Match nomination on RTE’s Sunday Game. Mark has been a fantastic ambassador for the club in recent years, always willing to lend a hand when required and his success is richly deserved. Cork will face Waterford in the Munster semi-final on the 18th of June and everyone at Blarney GAA wishes Mark and the lads the very best of luck.

Club Beag. Club Beag is up and running, with our young 3 and 4 year olds really enjoying themselves on our wonderful new Astro Turf facility. It’s great to see the kids turning out in numbers with their parents coming along and supporting them. Club Beag is all about fun and while we introduce the children to hurling and football, this is done in a very light hearted and fun way with the emphasis on enjoyment We would be only too delighted to welcome any boys aged 3-4 years to Club Beag again on the second Saturday of next month at 11am, so please come along and share the word with other parents out there. It encourages both children and adults to meet, make new friends, while enjoying sport in a safe & friendly environment. If you are new to the community or not too familiar with GAA, it is a great way to get an insight into our club and become familiar with our facilities, while meeting other parents in a social/enjoyable environment. See blarneygaa.ie for more information on Club Beag

U14 Footballers at Intercounty Blitz. Well done to Eoghan Kirby and Daniel Murphy who represented Cork Mid-West in an Intercounty football blitz in Mallow on Saturday May 13th. On the day, the teams played 3 matches of 30 minutes each, with the following teams in action on the day: 1.Cork West 2.Cork City /East 3.Cork Mid West 4.CorkNorth 5.Tipperary Yellow 6.Tipperary Blue 7.Limerick 8.Clare 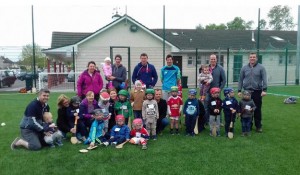