A big thank you to all those who took part in the 50th Anniversary of the Blarney Square League. A special thanks to Ian Butler, Ger Sheehan and Johnny Forrest for all the hard work and effort put in in organising the event, and congratulations to the winners A. P. Vaughan Skip Hire.

The Castle Hotel and Muskerry Arms pictured in the final of the Ladies Final. In what was a keenly contested and highly entertaining final The Muskerry Arms took home the Cup, winning 4-3 on penalties.

A big congratulations to our U12 team in winning the division 1 league. Pictured below are the celebrations following the presentation of the Cup.

This was the first year that our academy played at The Square Leagues and it was a great success creating a great buzz around the village.

A fanatic season by both our U14 teams, with the 14’s finishing second in the league and guaranteeing promotion to division 1 next season.

The 14A also finished second in the league securing promotion to the division 4 next season.

Congratulations to our Senior team in winning the Pop Kelleher Cup. 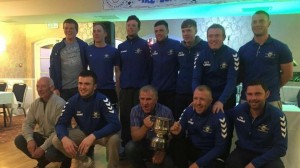