Each year since 2012, Scoil Mhuire has received a Creative Schools Award for excellence in arts education projects. These awards have been presented at ‘The Ark’ Children’s Cultural Centre, Temple Bar, Dublin. Previous projects themes include the Titanic, Ballincollig Gunpowder Mills, Hamlet in formats such as film, newspaper and stage drama. This year fourth class received an award for their 20 minute Promenade Theatre production of ‘Romeo and Juliet’. This involved students performing six scenes not on a stage but in six different locations (outdoors and indoors) around the school. The invited audiences began by following the actors as they performed the street fight scene in Verona in the Infants yard, then on to the Balcony Scene at the ramp outside the school hall , then on to the next three locations until all reached the final Crypt scene staged in the school poly tunnel. This Drama project was co-ordinated by Helen Ní Ailíosa. The second phase of this integrated arts project was co-ordinated by Fourth Class teacher Margo Ní Shuilleabháin. It began with an examination of different kinds of photographs of the six scenes. This developed into the creation of six collaborative pictures, one of each scene, and coloured in soft pastels which the students decided added a sense of ‘romance’ to the characters and action in that scene. This impressive Visual Arts display was exhibited at the Award Ceremony in ‘The Ark’. The distinguished classical pianist John O’ Connor presented the award and was charmed by Fourth Class student Valerie who, dressed as Juliet, presented him with a rose, quoting from the play ‘What’s in a name? That which we call a rose by any other name would smell as sweet’. According to Scoil Mhuire principal, Máiread Ní Mhurchú, ‘Our school has benefitted in multiple ways from it’s involvement in the Creative School Award initiative’. This Creative Schools Award is one of a number of initiatives hosted by the ACAE (Association for Arts and Creativity in Education) which directly promotes and nurtures creativity in the classroom. 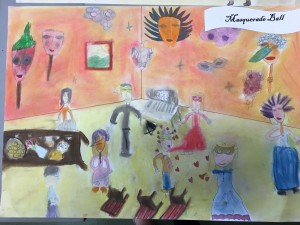