Double Sciath Victory! Congratulations to the girls and boys of Cloghroe NS who won both their camogie and hurling Sciath na Scol finals in Páirc Uí Rinn, on Tuesday 30th May. Pupils, staff, parents and the entire school community were extremely proud of the performances both on and off the pitch. Cloch Rua Abú!!

Irish Aid One World Award. We would like to congratulate Miss O’Connor’s 6th class, who recently won an award for a project they did for the Irish Aid One World Competition. They are now through to the national finals in Dublin Castle on June 13th. We wish them the very best of luck!

Fifth Green Flag – Biodiversity. Congratulations to all the children in our school who were awarded their fifth green flag, this one for Biodiversity. The award ceremony took place on Thursday, 11th May.

Digital Skills shine through. Congratulations to Mrs. Golden and the boys and girls in Fifth Class who were awarded a Gold Badge at the Digital Skills Event after participating in the All Aboard initiative. In addition, to coincide with Safer Internet day, children broadcasted internet safety tips on the school intercom in the form of a radio show. The children’s work around Internet Safety was recognized by the organisers of Safer Internet Day. Finally, children in Cloghroe NS were interested to know how the rehearsals were going for the upcoming musical, Aladdin and so created a blog using ‘Padlet’. Four children interviewed the actors and actresses rehearsing for the musical on CNS ’17.

Active School. Now that summer has arrived, children in senior classes have moved to the top pitch for break and have plenty of space to play soccer, skipping, running, throwing and catching games and any other activities that get them moving. A selection of teachers, SNAs and children made up teams who took part in a soccer tournament on the astroturf pitch, as part of Active Week. 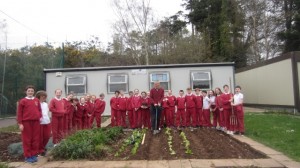 School Garden. Children helped retired teacher Mr. Keady to plant a variety of vegetables in the garden. We are all looking forward to a successful crop this year.