When Michael O’Riordan from Grenagh was diagnosed with cancer in 2016, his life took a turn that he never expected. Stephen Lehane reports on his friends ordeal.. 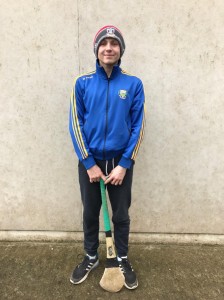 It was early July 2016, and 15 year old Michael O’Riordan was spending his time at the local GAA field in Grenagh, playing hurling and hanging out with friends. On July 18th he was diagnosed with embryonic rhabdomyosarcoma, a rare but treatable cancer. The news hit Michael hard. He went from anger to sadness to fear, he thought “Why me?” Weeks after Michael’s diagnosis, he made a decision that he would beat his cancer, that he would conquer it. He began chemotherapy and radiotherapy in both Crumlin and St Lukes. He would feel nauseous for days after his treatment, struggling to keep a meal down. Michael began to loath everything related to his treatment, the 4 hour car journey to Dublin, even the sight and smell of the cancer ward made him sick. One of the hardest things for Michael was that he was forced to stop playing GAA competitively with his local club Grenagh for both minor and U16 teams. But Michael never stopped playing by himself. During his treatments, after his body was pumped with chemicals in order to kill the cancer in his body, hurley in hand he would hit the sliotar off of any wall he could find. This distracted Michael from both the pain and nausea he would experience. “It always helped to clear my mind, I would play until I annoyed everyone in the ward, playing off the walls until I was too tired, I would play for hours and hours.” Michael not only decided to fight the cancer, but he was determined to remain fit throughout his treatment to the best of his ability. When Michael was feeling up to it, during his downtime between rounds of treatment, he would try to be the familiar face at training that he used to be. His close circle of friends and family found it very hard to see Michael deteriorate physically, losing weight and energy, and on November 15th Michael’s condition rapidly deteriorated. He was rushed to to hospital immediately with intense pain and discomfort. Michael spent a full week in intense care with a team of doctors working around the clock to keep him alive, and luckily Michael survived although he had a full body infection caused by the initial infection of his Hickman line in his chest for delivering the treatment around his body. He was told afterwards that he was lucky to be alive. It was truly a scary moment for him and his family. Michael continues to inspire all around him with his story, particularly his fellow teammates in Grenagh. The strength and determination of Michael to overcome his sickness incredibly motivating. Michael is now well on his way to recovery, he becomes stronger physically day after day. Michael is now finished his treatment and is free of all cancer, he has returned fully to training and is recovering to play competitively once again. Michael says he couldn’t have gone through his ordeal without the support of his family and friends, especially without the support of his girlfriend Emma who was with Michael all the way, constantly visiting and supporting him. “She took my mind off the cancer a lot and she was always the first person I went to when I was upset about it.” Michael’s family stated that they could not have gone through this ordeal without the support of the local community, with Michael’s mother Maggie saying, “We are extremely proud of Michael, it has been a challenging time for the family. As a sixteen year old he remained positive throughout a harrowing treatment. He stayed focused on recovery from day one, nd against all odds he continued his fitness. He is an amazing boy who has inspired many people and we cannot say enough thanks to all those who supported him, we will be forever grateful. We are privileged to have such a wonderful son. This life changing event has made us realise the important things in life, we now know the importance of love, and we love all of our children for their resilience and kindness positivity even in our darkest hours.”