It was with half a heart that Laurie and Bill McGrath from Connecticut returned to Ireland to celebrate their 25th wedding anniversary. However they will be returning with a full and happy heart! Laurie first visited Ireland 26 years ago with two girlfriends, having just met Bill, who was to become her husband. Reluctantly Bill waved her off, but not before giving her a gold heart to accompany her on her journey. Half of the heart she wore on a chain around her neck, whilst the other half she buried in Ireland, determined one day to return with Bill and retrieve it. Discounting the grounds of Blarney Castle, as Laurie reckoned it would be impossible to find due to the evolving nature of gardens, and the Cliffs of Moher, fearful of erosion, Laurie eventually buried her heart beside a raised crypt in the Church of Ireland graveyard in Castletownroche. With four children, 25 happy and busy years passed before the couple made their return journey this month and, from their base at Blarney Castle Hotel, returned to the spot. Armed only with a teaspoon, the couple found their precious treasure immediately, the heart wrapped carefully in cotton. The accompanying love note that Laurie buried with it in had unfortunately disintegrated with time, but the heart was still beating as strongly as it was 25 years ago! 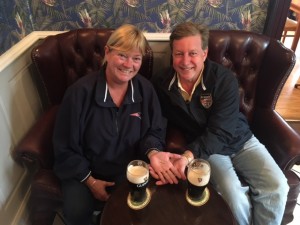