As cars from across the 32 counties congregated at the Riverside Park Hotel, Macroom recently for the ninth Ted’s Opel Vauxhall Run the sun shone out brightly. Cars of all eras from 1947 right up to a 162 were in attendance. With the weather on our side any roof that could be put down was. Ivy, assistant pup in training with Irish Dogs for the Disabled also attended with handler Kate. The first Special Award of the day went to a Vauxhall Wyvern owned by Cyril Casey and chosen by the Riverside Park Hotel. The cars then headed to the lunch stop at the Eccles Hotel, Glengarriff via Ballyvourney, Top of Coom, Kilgarvan, Kenmare, and the Healy Pass. After lunch the main awards were presented. The Opel Ireland Perpetual Trophy was presented by Fergal Maron, Opel Ireland to Joey O’Shea for his Opel Manta, Kevin O’Leary Perpetual Cup went to Neil Hourihane for his Opel Corsa, Cartell.ie Perpetual Cup went to Cyril Casey for his Vauxhall Wyvern, the Perpetual Shield went to Don Mavor for his Vauxhall Omega, the Jackie Small Memorial Trophy went to David Hendron for his Opel Kadett Coupe, the Spirit of the Run Perpetual Trophy went to David O’Brien who brought his Opel Rekord Dsl which belonged to his late father. The second special award which was chosen by the Eccles Hotel staff went to John Unkles with his Opel Manta. The run continued on through Ballylickey and stopped off at Gougane Barra where another Special Award was presented to John Kelly for his Opel Kadett Coupe, this car was picked by a family from Texas who were staying in the Gougane Barra Hotel. The route than took in the South Lake road, Inchigeela, Macroom and returning to the Riverside Park Hotel where the final special award was presented to Gary McDonald. There were all kinds of cars from Vintage to modern, standard to modified, all enjoying the scenic views mixed with some roads used as rally stages and excerpts of the Wild Atlantic Way. It was a sight to see all the cars in all guises meandering down the Healy Pass. A thoroughly enjoyable day was had by all and are looking forward to next years event. 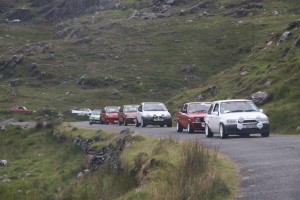