We have all heard of “the game of two halves” and this final was no exception. With SMI getting off to an incredible start scoring 1-02 within the opening minutes it looked like this wasn’t going to be Blarneys day. SMI were determined to make this a hard battle for the Cork side but the Blarney girls did not let this lead rattle them and kept their heads in the game. Once the Blarney side settled and Claire Ahern and Fiona Burke started popping point after point over the bar, they knew they still had a fighting chance. Within the first 20 minutes Blarney suffered a major blow with the loss of Aoibhin Barry due to injury, however her substitution Ciara Sheehan proved time and time again that she was up to the task. At half time the Blarney side were losing by a mere point to their extremely strong opposition. However, with the Munster Senior final loss still fresh in many of their minds, SMGS were determined not to leave Charleville feeling that pain again and began the second half fighting for the title. With Eve Mullins of Blarney playing an outstanding role in midfield, it was clear the the Cork side were hungry to be victorious. Despite tough marking on Mullins, she fought hard for every single ball and kept her head in the game (quite literally at times!). With the Blarney Captain doing everything in her power in midfield, the Vice Captain Fiona Burke too rose to the challenge and kept increasing the Blarney scoreboard so much so that she burst her boot!!! After a quick change she was off again in Ms. McCarthy’s boots and found the back of the net, not once but twice! It looked like nothing was going to stop the Blarney side. Aideen Donovan kept Blarneys defence in tacked playing the role of a sweeper making sure that SMI didn’t claw their way back along with Anna Barry-Murphy who made numerous spectacular saves in goals. Alice O’ Connor too had her work cut out for her marking Sophie Liston of SMI and a deserving county player, however Alice was determined not to let Sophie inch past her pressuring her each time with outstanding defence making sure she didn’t score a single point in the second half. In the final 10 minutes Aislinn Buckley of SMGS had no option but to take down an SMI girl who was gunning for a goal. Aislinn’s fast thinking resulted in a dreaded penalty against SMGS. With the fearless Karen O’ Farrell lining the goal it was a tense moment for both sides as Lauren Brouder took the opportunity to reduce the margin. With an unbelievable save by Karen who calmly deflected the ball with her leg, Blarney were on their way to securing the title. It was clear at this point that there was no stopping the Blarney side as Dara Twomey, Eimear O’Reilly, Claire Ahern, Orla Cronin and Fiona Burke kicked over point after point. The Cork side were crowned deserving winners as the full time whistle blew on a score line of 3-11 to 2-08. An outstanding achievement for the girls and their coaches Ms. Behan, Ms. Markey and Ms. McCarthy. Also, a huge congratulations to Fiona Burke of Blarney who was awarded the deserving title of ‘Player of the Match’ after scoring three magnificent goals. Panel list: E. Mullins, C. Ahern, E. O’ Reilly, F Burke, D. Buckley, K. O’Farrell, A. Barry Murphy, S. Kiely, A. Buckley, O. Cronin, A. Donovan, A. O’ Connor, D. Twomey, C. Sheehan, A. Barry, K. O’ Connell, O. Leahy, E. Hickey, L. Kelleher, S. Ring, S. Cotter! M. Murphy 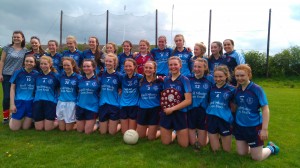