Fine Gael Senator for Cork North Central Colm Burke has been re-elected to Seanad Éireann on the Industrial and Commercial Panel, having been nominated by Nursing Homes Ireland. “I am delighted and honoured to have been re-elected to Seanad Éireann and look forward to continue working on behalf of the people of Cork North Central. In the next term, I hope to continue to again focus on crucial issues affecting all members of our community such as health and housing.” “I would like to thank all those who have helped and supported me over the last five years.” “I would also like to congratulate two fellow Cork Fine Gael Senators on their election to the Seanad, Jerry Buttimer, Cork South Central and Tim Lombard, Cork South West.” Burke was one of only 5 outgoing Fine Gael Senators to be re-elected to the Seanad. Fine Gael won 13 seats in this Seanad election, and the members are made up of 5 outgoing Senators, 4 former TD’s and 4 sitting councillors. 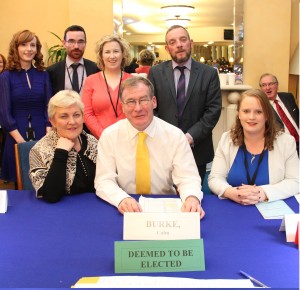