County Champions. The winning feeling is back in Berrings school as our indoor hurling team recently captured the county Sciath na Scol Cup. The final against Ballygiblin National School at Piarsaigh GAA was full of excitement, tension and emotion. Our boys won six games on the road to the final and displayed superb skills, commitment and determination. The future looks very bright got this young group of hurling heroes. Berrings Abú!

The Water Explorer team from Berrings National School are currently holding the top position on the Irish Leaderboard! They have had lots of fun with the Water Explorer challenges. Over the past few months they have been crowned both Irish School of the Month and Global School of the Week. Over 270 Irish Schools are involved in the competition and thousands of students across the world are completing challenges every week! Top Water Explorer teams could earn the chance to represent their country at The Water Explorer International Celebration event in London later this year. The children in Third Class here in Berrings are shooting for the stars and hope to hold on to the top position for the remaining few weeks of the competition. 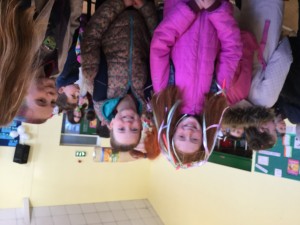 ecently we held a crazy hair day, to raise money for Our Lady’s Children’s Hospital Crumlin.  Children were encouraged to go crazy with their hair and they did! Staff and children alike went to a great effort to tease it, gel it, twist it, colour it and some dressed it up in a wig. Much needed funds were raised to help purchase a Platelet Agitator, a machine which is used to hold platelets before a patient undergoes Cardiac surgery. This cause is very close to our hearts as a number of children in our school have accessed the services in Crumlin in the past. Well done to everyone who took part!

There was great excitement in Berrings National School last week when we received the news that we had achieved our third Green Flag! The committee began their work almost two years ago by taking an audit of water usage within the school. Ways of reducing consumption at home and at school were then examined. This was followed by the preparation of an Action Plan. Four members of the committee will be collecting the flag at a special awards ceremony next month.

Trip to Griffins. The green fingered children of Junior Infants had the opportunity to visit their local Garden Centre as part of the Aistear programme. Griffins Garden Centre opened up their doors to Junior Infants and their teachers. The children and staff were greeted by Margaret and her amazing helper Lorna who took us around on a tour of the Secret Gardens. The children got to plant a sunflower seed and learned about the best way to take care of it. The children really enjoyed their day and Margaret was very impressed at the Garden Centre we set up in the classroom.