SMGS All Ireland Champions. Congratulations to SMGS and all involved winning the Michael Cusack Cup on the 16th of March last in Templemore. The lads defeated Roscommon CBS by two points on a historic day for the school and also a great day for the club with a strong representation of our own players on the panel. Well done to everyone involved and to all the coaches over the years who taught the players the skills of the game.

Huge thanks to all who donated items to our club stall, volunteered their time on the day and to all who attended our car boot sale on Monday last. Your support is most appreciated. Our next car boot sale takes place on Monday 2nd of May. We look forward to welcoming you all again!

Cul Camp – Save the date. This year the camp in Blarney will run from 4th – 8th of July. The hours of the camp is 10am to 2:30pm. Attendance is open to primary school children aged 6 years to 13 years.

Blarney St Patricks Day Parade. We were delighted to enter a float in this years parade, which turned out to be a great success. Huge thanks to all who gave their time to build our fantastic float and to those who participated in the parade. Please visit our website to view more photos.

Child Protection Workshop. It was great to see 27 club members attending our club Child Protection and Awareness Course on the 14th of March last. The main aim of the course is to create a basic awareness about the key issues in relation child protection. Many thanks to all who took part!

Club Beag returns for 2016. Club Beag is an initiative to introduce boys aged between 3-4 years of age to hurling/football in an informal and fun way. It encourages both children and adults to meet, make new friends, while enjoying sport in a safe & friendly environment. The club runs 30-minute sessions once a month on the second Saturday of each month from April – June (July for holidays) and August – October. The sessions take place in Blarney GAA grounds. The first session is on the 9th of April at 11:30am. It is free to join Club Beag! For further queries, please contact Club Beag’s Chairperson Mairead Sheehan on 087 4170690.

Intermediates Win By Two Points. Blarney’s first home league game of the year was at home against Cloyne 31st of March last. Before the game, there was a minutes silence observed in memory of club member Cian Kirby who suddenly passed away. The red and black of Cloyne got off to the better start and were four points to no score ahead after 8 minutes. Cloyne were physical down the centre and took Blarney time to settle into the game. Barra Connell opened Blarney’s account from a free with Peter Philpott pointing two long range frees minutes later. After receiving quality ball, full forward David Dunlea was out in front of his man to score Blarney’s first point from play after 13 minutes. Blarney were now playing well as a unit and were two points ahead after 16 minutes, after scoring 6 points on the trot. As the half progressed, the east Cork side were one point ahead on the scoreboard, before Stephen Sheedy scored a well taken point from the left wing. Another free from O’Connell and wing forward John Barrett scoring from the right wing, gave Blarney a two point lead at the break. O’Connell was soon called upon and opened the scoring in the second half from a dead ball. However soon after, Cloyne quickly capitalised on poor defending to score the only goal of the game to bring the sides level Blarney 0 – 10 Cloyne 1 – 7. The momentum swung Cloyne’s way and they started to dominate midfield and their half back line. Blarney made a number of substitutions mid-way through the second half with the most influential being Mark Cremen who score three points from play. The home side worked hard to get back into the game and found themselves in front with 10 minutes left on the clock. Both sides continued to exchange points. On the 29th minute Keith Costello found himself in space in the middle of the field to strike low and hard over the bar to give an exciting finish to the game. With tensions rising on both sides, Blarney saw out the game to the final whistle to give them a much deserved win. Final score, Blarney 0 – 18 Cloyne 1 – 13 Paul Hallisey , Cormac O’Mahony, David Walsh, Vincent O’Mahony, Peter Philpott Joe Jordan, Brian Hurley, Ray Murphy, Keith Costello, John Barrett, Barra O’Connell, Stephen Sheedy, Ray O’Donovan, David Dunlea, Colin Murphy. Darragh Kelly for Ray O’Donovan, John Daniel Good for Stephen Sheedy, Mark Cremin for Ray Murphy.

Junior A Hurlers Have A Comprehensive Win Over Gleann Na Laoi After a day of rain, Blarney welcomed local neighbours Gleann Na Laoi for their second Junior A hurling league game of the year. The visitors opened the scoring in the first minute before Sean Crowley and Dan McSweeney quickly responded with well taken points from play. Blarney started to dominate, with a nice mix of young players in the team. Mid way through the first half, John Daniel Good broke past the defence and found himself in space in front of the goal finishing to the net. Mark Cremen followed with a flurry of points from play and dead balls to leave the half time score Blarney 1-11 Gleann Na Laoi 0-5. Both sides exchanged points after the restart before the game was put well out of reach for Gleann Na Laoi when substitute Niall Hayes showed his experience to finish for his first goal of the year. Wing back Stephen O’Brien took over free taking duties with a point on 28th minute and Sean Crowley soon after scored another goal for the home side. Full time score read Blarney 3-15 Gleann Na Laoi 0-11. It was a comprehensive win in the end with a lot of positives taken from the game. The Juniors had over twenty on the panel lined out on the night. All players worked as a unit which gives lots of encouragement for the year ahead. Conor Murphy, Darragh McPolin, Sean Twomey, Padraig Conway, Sean Crowley, Cormac O’Mahony, Stephen O’Brien, Stephen Sheedy, Ray O’Donovan, John Daniel Good, Dan McSweeney, Wayne Shine, Vincent O’Mahony, Mark Cremen, Darragh Kelly.

On the 2nd of April last, the club ran a Heartsaver CPR AED Course in the Gaelscoil. The course taught 12 club members the basic techniques of cardiopulmonary resuscitation (CPR), how to use an Automated External Defibrillator (AED) and the relief of choking for adults, children and infants. An AED is a computerised defibrillator which analyses the heart rhythm of a person in cardiac arrest and uses voice prompts to advise you if a shock is needed. The course took approximately 4½ hours to complete and the club ran both a morning and an afternoon course.

Fermoy Too Strong For Our Intermediates. Our Intermediates are still in search of their first league points away from home after losing to Fermoy on the first Sunday of April. The team saw just one change to the side that defeated Cloyne at home a few days earlier with Ray O’Donovan unavailable with a leg injury and Mark Cremin slotting in at top of the left. Keith Costello scored the opening score of the game finding himself in space in the centre of the field to strike well over the bar. A few minutes later, Fermoy who were strong in the air, responded with two points in quick succession. Soon after, Blarney corner back Vincent O’Mahony found himself in unfamiliar territory scoring a point 45 metres out from the Fermoy goal. Fermoy came more into the game and started to win the key battles. Their full forward line were a handful, especially David Geary & Jack Quinlan a constant threat. Barra O’Connell kept Blarney in touch with accuracy from frees. It was not until the 27th minute before Blarney scored their next point from play, thanks to Mark Cremin. The sides went in at the break Fermoy 0-9 Blarney 0-6. Fermoy now playing into the town end, scored seconds after the restart. Both sides exchange points in the next few minutes, with Blarney’s scores coming from O’Connell frees. Colin Murphy shrugged off his man to score Blarney’s first point from play in the second half on the 44th minute, to leave the scoreboard read Fermoy 0-13 Blarney 0-11. Fermoy found it easier to score while Blarney found it difficult to win puck outs. As the half progressed, the home side picked off their scores and put the game out of Blarney’s reach when Quinlan showed great strength to win primary ball in the full forward line, made space and struck low and hard to beat Paul Hallisey from the 21 metre line. The final score, Fermoy 1-18 Blarney 0-13. Paul Hallisey , Cormac O’Mahony, David Walsh, Vincent O’Mahony, Peter Philpott Joe Jordan, Brian Hurley, Ray Murphy, Keith Costello, John Barrett, Barra O’Connell, Stephen Sheedy, Mark Cremin, David Dunlea, Colin Murphy. John Daniel Good for Cormac O’Mahony, Sean McSweeney for John Barrett. 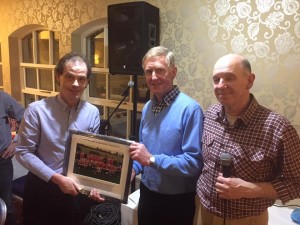