There has been an air of sadness this month in the club, and throughout Blarney, with the sudden passing of club member Cian Kirby. Ar dheis Dé go raibh a anam

The Club are extremely proud of the fact that Connie Riordan was nominated to be the Patricks Day Parade Grand Marshall. Connie and wife Rose continue to worked tirelessly for the Blarney United as they have the past 50 years. A fantastic achievement and truly well deserved.

BU FC would like to congratulate Blarney United U17 Premier Team on thier 2-0 win in the Gussie Walsh Final against Lakewood AFC at Turners Cross last Friday. Also well done to Finbar Hogan (Coach/Manager) and Noel Kelleher (Assistant Coach/Manager) for thier timeless dedication to the whole squad and club.

Congratulations and well done to our 2 BU FC U-10 squads who played each other in the Cork Coerver Tournament Shield Final this weekend.

And also really well done our U9’s who also took part in the Coerver tournament .

Our main fundraising event of the season is being held in The Castle Hotel Blarney May 21st. Should be a great night, your support would be greatly appreciated. 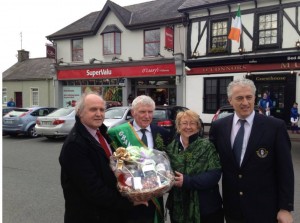