With Proclamations, flags and children of the rising local schools commemorated 1916 in style. There was a fabulous day at Scoil Chroi Iosa who commemorated 1916 with Michael Murray raising the flag, sixth class students reading the proclamation and all the pupils dressing as children of the rising. The Scoil Mhuire gan Smal commemoration of the 1916 Rising took place with Mr. Sheehan addressing the assembled school body and explaining the significance and history of the tricolour, whilst Ellen McSweeney, on behalf of the Student Council, read the Proclamation. The school competition to find a new Proclamation for 2016 was won by Peter Harte, second year, who then read his manifesto for the 21st century before raising the flag, assisted by Mr. Dodd. Amhrán na bhFiann was then performed by the music students whilst first year students performed a fabulous re-enactment. Lá an Fhorógra i nGaelscoil Mhuscraí. Pupils read their own modern day proclamations as part of their flag-raising ceremony. A ceremony was held at Dripsey National School with a tin whistle rendering of the National Anthem which was followed by a reading of the Proclamation, and by the pupils’ vision of the future Republic. The National Flag was carried in procession and was then raised by the headmaster, Bernard Sheehan. Father Tom McDermott offered a prayer and Mr Sheehan made a short speech. There were patriot scenes in Kerry Pike National School when Orlaith O’Sullivan read her grandfathers poem on 1916 in front of the school. All the students of Kerry Pike National school did their country proud on this day of commemoration. Cloghroe National School commemorated the centenary anniversary by raising our National Flag and pupils dressed in costume to create a wonderful atmosphere for this historic day. The entire school gathered outside to raise the tricolour and to sing Amhran na bhFiann and then participated in a cultural assembly which included traditional dancing and singing as Gaeilge. 6th class pupils read aloud the Proclamation of the Irish Republic to conclude this very special day. St Lachteen’s National School celebrated Proclamation Day by raised the Irish flag as well as dressing up in 1916 clothes as part of their Easter 1916 commemoration. 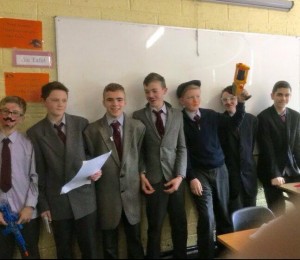