Scoil Íosagáin, Blarney, 40th Anniversary Parade On March 25th, 1974, the girls, along with five teachers, left Scoil an Chroí Ró Naofa (Caílíní) on St. Anne’s Rd and paraded through the village to their new school, Scoil Íosagáin in Castle Close. On Tuesday March 25th 2014, this event was re-enacted, followed by Mass in the school halla. It was attended by former staff and pupils of Scoil Íosagáin, as well as pupils of the newly amalgamated Scoil Chroí Iosa. 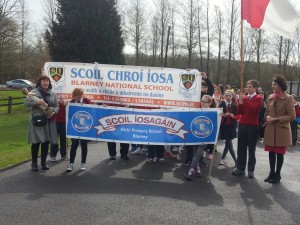