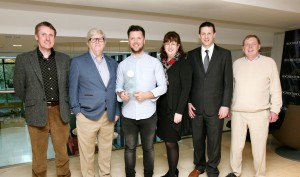 Ballincollig’s Daire Hickey was recently named by Forbes magazine as one of its international Top 30 aged under 30 business stars, a list of the world’s most powerful young people under the 30 threshold. Oscar-nominated actress Saoirse Ronan was the only other Irish person to make the cut. Daire Hickey also received the Cork Person of the Month award to mark his career to date, including co-founding the Web Summit with Paddy Cosgrave and David Kelly. This global technology conference was based in Dublin for the last five years and now moves on to Lisbon. Over those years this Web Summit has grown from the original three to a staff team of 140. In 2015 alone Daire pulled in more than 1.8 million in media partnerships. Last year attendees were 42,000 from over 120 countries and Speakers included the founders and CEO’s of Twitter, YouTube, Netflix, Skype, Tesla, PayPal to name but a few. Daire Hickey manages these relationships with Speakers, Clients, Media and Sponsors. Daire was also the co-founder of F.ounders, which is an annual private gathering of 200 CEO’s of the world’s leading technology companies which happens alongside the Web Summit. This year he will be involved in organising the Web Summits in the new locations of New Orleans, Hong Kong and Bengaluru, India. “Daire Hickey is a young entrepreneur, highly motivated, to be the very best in his sector. The Cork Person of Month award was established to inspire young people to follow in the footsteps of local heroes who have the confidence to carve out their own paths in work and in life. Daire Hickey has certainly done that,” said awards organiser Manus O’Callaghan.