Cloghroe National School has been a hive of activity in recent weeks. Pupils commemorated the centenary anniversary of the 1916 Rising with a variety of activities. On March 14th, 6th class pupils performed their play ‘1916’ in the school hall. The performance was preceeded by a traditional Irish ribbon dance and our traditional Irish music group.

On March 15th the school held a special ceremony to mark raising our National Flag. The entire school gathered outside to raise the tricolour and to sing Amhran na bhFiann. Pupils then participated in a cultural assembly which included traditional dancing and singing as Gaeilge. 6th class pupils read aloud the Proclamation of the Irish Republic to conclude this very special day. 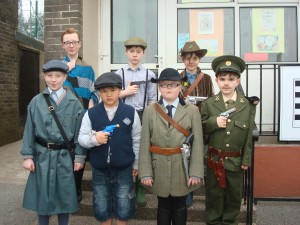