Whitechurch singer / songwriter Clare Sands is a talented 20 year old musician, composer and songwriter who has just released her debut single ‘Change Is A Comin’ on April 4th worldwide via iTunes. Having spent the summer of 2013 playing around New York City and making beelines into the NYC music scene, Clare has deep roots in Irish traditional and folk music, and her music emanates from these family traditions, combined with her love of Jazz and the Blues. Change Is A Comin’ is Clare’s first single and captures Sands’ unique voice and gritty lyrics, which demand the attention of the listener. Accompanied by her backing band The Cranes, the song presents a unique texture which recognises Sands’ influences, whilst presenting them in a new and energetic way. In support of her debut single Clare will be hitting up Ireland with a 15 date tour, accompanied by fellow songwriter and harpist Aisling Urwin. The quirky blues/folk duo have fifteen dates in venues around the country, followed by dates in Holland and Germany in the early summer. Don’t miss the opportunity to catch Clare on her tour, and her Cork dates include April 9th – DeBarra’s Folk Club, Cork April 20th -The Bru Bar, Cork April 30th – The Oliver Plunkett, Cork May 19th -The Crane Lane, Cork 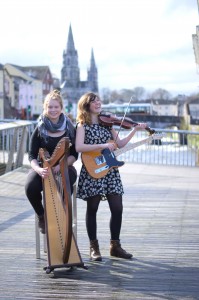