Norwegian Air – Cork to Boston flights. Last week I travelled to Brussels to meet with Anthony Gardner, the U.S. Ambassador to the European Union, who is America’s highest-ranking diplomat in Europe. I raised the issue of the planned flights by Norwegian Air between Cork and Boston with the Ambassador, and emphasised to him the importance, for both regions – Massachusetts and Munster – of getting these flights off the ground. Both Massachusetts and Munster have large populations, and with very strong Irish-American links, and a high level of business contacts, these flights clearly make commercial sense. The planned route is particularly important, as it would be first direct link from Cork to the US, with 5 to 6 flights per week. We have an agreement in place between the EU and the US, called Open Skies, which opened up the market for transatlantic flights, with the aim of being good for competition, good for passengers and good for business. The planned flights between Cork and Boston tick all of these boxes. I had a very good meeting with Ambassador Gardner where I raised my concern that the licence process, which is overseen on the U.S. side by their Department of Transport, seemed to be taking longer than it should. As Europe Minister, I’ve met with the Ambassador a number of times since my appointment in 2014 and after last week’s meeting he’s now well aware of our desire in Cork to make these flights go ahead without delay. I’ve discussed this issue with Niall McCarthy of Cork Airport and Conor Healy of Cork Chamber. We’re all in agreement, everyone in Cork and the South, that a direct flight connection from Cork to the east coast of the U.S. is long overdue. Hopefully we’ll now see some progress on the U.S. side over the next number of weeks, so that we can get these flights off the ground.

Blarney Person of the Year. I was delighted to attend the Blarney Person of the Year event last weekend. Big congratulations are due to all of the nominees from throughout the year, who demonstrated the very best in community spirit in their respective fields. Special congratulations go to Deborah Lynch, the very deserving winner for 2015, who introduced the First Responder Community initiative to the Blarney area, which I have no doubt, will save many lives in the area in the coming years. 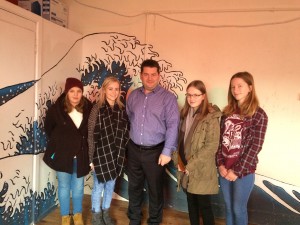 Castle Foróige Blarney – planned new Community Centre for Blarney. I also recently met with Castle Foróige Blarney youth club to discuss how we can work together to get a new Community Centre for Blarney off the ground. I strongly support this initiative for a new centre that will provide accessible community facilities for Blarney people of all ages. We will have to work to secure a location and fundraise for the new premises, but I look forward to working with Castle Foróige and fully playing my part to make this plan a reality.