Ancient Sweet Donoughmore: Life in an Irish Rural Parish to 1900 was launched last month in Stuake, Donoughmore. It was standing room only as the capacity attendance enjoyed a highly entertaining evening where old friends met and reminisced. John O’ Connell MC acclaimed the determination, foresight, vision and courage of the author Gerard O’ Rourke to publish this new information for the benefit of the public. Guest speaker Michael Lenihan delved into the book and highlighted some interesting anecdotes such as the fact that hidden treasure is buried in the townland of Pluckanes. Of particular interest was a story about a tenant’s lease agreement in the late 18th century. The plight of the people during the famine was another fact that has not been universally known. Mr Lenihan remarked that as an avid local history collector this book was one of the finest he had seen in every aspect. Author Gerard O’ Rourke recalled the research and publication of his first book A History of Donoughmore Hurling & Football Club in 1885 where he found that a vast amount of information on the parish was waiting to be explored. Family commitments postponed any intensive research for this book but he made provision for future investigation by detailing sources and references. His involvement in the local historical society’s two journals and his close involvement with Richard Henchion in the publication ‘Donoughmore and All Around’ further delayed the present work. Following this, time permitted him to unravel Donoughmore’s early history and through extensive research the basis of a publication was made, but it took five years of intensive work. A recitation of an old parish poem The Cross of Donoughmore by Joseph Twomey accompanied by Oisin Sheehan provided an uplifting experience for the attendance. The finale was a recorded version of the poem/ ballad Ancient Sweet Donoughmore by Paddy Foley formerly of Ballycunningham which brought rapturous applause on a night when Donoughmore came alive. The publication, which retails at €25, is of interest to anyone with a connection to Donoughmore and makes a perfect Christmas gift. It is available in many local stores, from the author (021 7337368) or online at www.donoughmore.com. 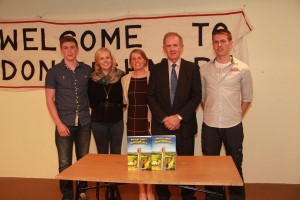