Lovely local boy, Michael, recently celebrated his 3rd birthday by taking ‘little steps’ at his therapy centre First Steps In Limerick. His mum Orla told The Muskerry News, “I was blessed with a very special little boy. Michael is my superhero, he is the reason I get up everyday. Michael has fought so hard to be here today, and both Michael and I are delighted that we chose Blarney as our home, it’s where we belong. Michael has captured the hearts of the local community and local support has been phenomenal in getting him where he needs to be.” For those of you that have not yet come across Michael, Michael was born on the November 6th 2012 with a serious condition called Hydrocephalus which is better known as fluid on the brain. Michael cannot walk or talk and he is peg fed. Despite his severe developmental delay, Michael never stops smiling. Orla continued, “In a few short months we have raised over €10,000 and we could not have done this without the support of our local community, the people of Cork, and friends and family all over the country. Michael has touched the hearts of people all over the world as far west as The USA and as far east as Australia. “Michael is currently attending a twelve week specialised programme of physiotherapy in First Steps in Limerick which consists of two one hour long intense sessions every week. Michael works so hard and puts so much effort into it and never once had cried. He is such a strong little boy and he is my little warrior.” The money raised is going towards Michael’s therapy in Limerick and it is hoped that he will be able to get equipment for home therapy. His family are looking into cranial reconstruction therapy in Ireland in the hope that they can get it done in this country. “The Doctors gave Michael very little hope,” Orla told us, “They told us to prepare for the worst. What parent wants to be told that? Prepare for him not being able to do anything for himself. The day Michael was brought home from hospital at 30 days old one of his Doctors said to us ‘I hope Michael proves us wrong’, I said ‘He will, I believe in him’. “Michael can’t do everything a ‘normal’ three year old can do. But I am so proud of my son every day for just being alive, everything else is a bonus.” Orla concluded, “There is one person in the community that has supported me since before I had Michael. When I told her he was going to be born with a serious problems she said everything will work out, everything will be OK and she was right, she has been my rock she has been there for me when I needed her most. I know she won’t want to be named but everyone who knows her will know who I’m talking about.” If you would like to make a donation to Michael fund please contact Superman – Michael’s Little Steps Facebook page. 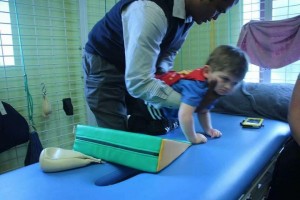