Ballincollig Tidy Towns celebrated its recent16th Annual Awards Ceremony since the core of this present committee took over in 1999 even though this year BTT Celebrates its 50th Anniversary. The event has grown in stature over those years to one of the main social events now in the Community of Ballincollig. Close on 300 people attended the event in The Oriel House Hotel where the Guest of Honour was The Mayor of the County of Cork Cllr John Paul O’Shea. Chairman Tom Butler outlined the very successful year that Ballincollig Tidy Towns has had to date in retaining their Gold Medal for the fourth year in the SuperValu National Tidy Towns Competition and also, winning the County Award in Cork South West in the same competition. They also won Category B2 in the Cork County Council Anti Litter Challenge. Tom Butler said, “Friday night was a night of celebration, an evening where we can reflect on where we have progressed from and also to ponder as to what we as a community can achieve in the future.” This was in direct reference to Ballincollig’s position now as being 6 points behind the National Winner Letterkenny. “It could so easily be a soulless and lifeless commuter belt but Ballincollig has a fantastic community spirit and we must continue to work together to strive to make it even better.” He said. “The future of Ballincollig is up to each and every one of us here tonight and we encourage you to make a difference and to give a little of your time for our community, to help Ballincollig achieve the ultimate accolade in the future.” A total of 56 prizes and €2250 in vouchers were handed out and the main prizewinners were Schools Gaelscoil Ui Riordan and Our Lady of Good Counsel who both won their respective categories, overall winner of the retail premises was Paul O’Connor and Daughter Shoes Main Street. Highly commended in this category were Desmond’s Menswear, Kellehers Pharmacy, Tudor Rose Florists, House of Flowers Florists, and Evan G’s Menswear. The Public Buildings Category was won by Ballincollig Community Nursing Unit and Highly Commended was The Church of St Mary and St John and Cork County Council Area offices. The White Horse won the Best Pub Front and highly commended was Mary O’Connell’s Bar In the Commercial and Industrial Category McDonalds Ballincollig was deemed to a worthy winner while Tesco Ballincollig, Ballincollig Shopping Centre, Barrack Square and The Old Quarter Medical Centre were Highly Commended.The Avenue (Coolroe Heights) was awarded an Endeavour Award The Best Commercial Floral Display was awarded to Quishs SuperValu and Highly Commended were McEoin Jewellers and Ballincollig Jewellers In the Garden Competitions the winners in the categories were Window Box Rene O’Connor Beech Road, Hanging Basket Anne Forde Leeview. Tubs Cei Hall West Village, Overall Garden Winner was Cei Hall West Village. A very special Merit Award was given to Mr Joe Kavanagh In the Estates Competition Prospect Lawn won Category A, Willowgrove won Category B, and Rosewood won Category C and the overall winner of the Lena Down Memorial Trophy for the best estate for 2015 was Willowgrove. 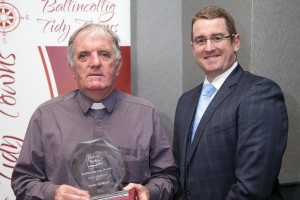