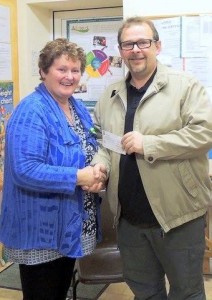 Ena Howell, president of Grenagh ICA making a presentation to local man Mark McGloughlin of Cycle Against Suicide Blarney, proceeds of their recent Wellness night which was held for the community in Rathduff hall. Mark who particated in the Suicide around-Ireland cycles in 2013 and 2014, doing just one day on his first outing, but in 2014 he signed up for 14 days and covered 1,400 kilometres both north and south of the border, helping to raise suicide awareness and to spread the message that “It’s OK not to feel OK.” During the 2014 cycle he witnessed first hand the positive impact the peleton was having in communities that they visited and he knew that he had to bring this to Blarney. A quick discussion with Jim Breen, the founder of the Cycle Against Suicide organisation and it was agreed that it should happen. In January of this year, Blarney and surrounding areas turned Orange for a day while over 100 cyclists braved the freezing temperatures and almost the same number participated in an indoor spinathon. The impact of the event was significant and feedback from the community was very positive. Mark and his team knew immediately that there needed to be an ongoing impact. It was not enough to have just the one day and leave it at that. So the team are working on figuring out ways of making the local community become even more involved and help to continue to spread the message to everyone. In late February a free “SAFETalk” suicide awareness training class was run in the village and the team plan to arrange at least two more classes in 2015. Additional training is also being considered. They are also planning to work with Scoil Mhuire Gan Smal to help them obtain Cycle Against Suicide Ambassador school status. Mark said, “I was very moved when I saw the impact of the national organisation as it passed through towns and villages all over Ireland. But the nature of a national organisation is that is has to focus on the national picture. I want to take this important message and work locally to spread it to all the communities in and around Blarney. The message is simple. It’s OK not to feel OK, and it’s absolutely OK to ask for help”.