It has been another busy month for Donoughmore Macra. This month kicked off with our drama team of Mairead Healy, Elaine O’Connell, Emily O’Donovan and Evelyn O’Shea taking the stage for the first time in the Cork County Round held in the Briary Gap. All four of the cast were nominated for Best Supporting Actress, so well done to all. The team’s success continued as they travelled to Rossmore, Clonakilty to participate in the National Semi-Finals on Saturday 28th. After an excellent performance of Graham Jones’ ‘The Room’ the team now advance to the National Drama Finals which will be held in Sligo. Well done to the girls, especially to Evelyn O’Shea who was awarded Best Actress on the night. Best of luck to all teams going forward.

On March 8th the club entered a Volleyball team in the Regional Round in Kilmurray and won. A huge congratulations to the team and best of luck going forward to the National Final which will be held in Killkenny on Sunday the 26th of April.

During the month Donoughmore Macra members presented cheques of €470 to both Marymount Hospice and the Cope Foundation. This money was raised at TV Fest, a TV themed table quiz that was held on Feb 21st. Thanks again to everyone who supported this event.

Members also participated in both Aghinagh and Glanmire Macras’ Mr and Mrs competitions. Donoughmore members Moira Healy and Barry O’Regan came a close second and club member James Healy and Marie Murphy came third. On Thursday 26th club members Meig Collins, James Healy and Elaine O’Connell participated in the Regional Round of Impromptu Debating held in Murray’s Macroom. The Donoughmore team were victorious on the night after debating Millstreet Macra on raising the age for the consumption of alcohol. It was a very interesting debate and well done to both teams.

On Friday 27th the club participated in the Cork County Round of National Talent held in Ovens. This was another great night for the club, solo instrumentalist Marie Wallace put on an excellent performance and the club’s comedy duo and novelty act placed second in their categories. Well done to everyone that was involved. On Saturday April 4th Donoughmore Macra held a surprise party for James Healy as he ends his term as Munster Vice President. James has done a considerable amount of work for Macra over the past two years, well done to James on a fantastic term. For more information on the club check out www.facebook.com/donoughmoremacra 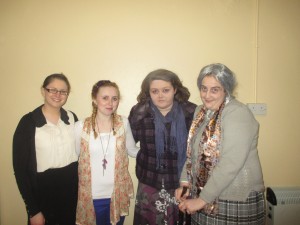