Tell us a little about your own education? And how you became a Teacher? I was educated at Clontead National School, Coachford and Coachford Community College. I studied for a Law Degree BCL in UCC from 1996 to 1999 and I qualified as a Primary School Teacher as a postgraduate student in Mary Immaculate College Limerick from 2000-2001. I taught 1st and 2nd classes in Rathpeacon National School from 2001 to 2004. When did you start working in Vicarstown National School? I started on September 1st 2004, and I was appointed Principal in June 2004 when there were 35 pupils on roll. It was a two teacher school, with each teacher teaching 4 classes. Numbers began to expand from 2005 onwards, and we gained a third class room teacher from September 2006 onwards and a 4th classroom teacher from September 2009. Also over that time we established two Special Educational Needs posts in the school and up to four SNA post over that period as well. Tell us a bit about your career in Vicarstown? I have had a very enjoyable busy time. The school has expanded from 35 pupils to a peak of 92 pupils during my 10 year tenure as Principal, I oversaw the extension and refurbishment of the school buildings in 2010 and I was involved in the appointment of new teachers and SNA’s. I was very pleased to be part of the Establishment of the European Modern Primary School which was launched in 2009 by Minister Batt O’Keeffe. The Minister also official opened the two classroom extension in January 2011. Two GAA Presidents, Nicky Brenan in 2005 and Chisty Cooney in 2011 visited the school as part of Féile. What do you consider to be your greatest achievement during your 10 years in Vicarstown? I have particularly enjoyed engaging with the local community getting their support for the Building Project and generating interest in the School. I was very pleased to be part of the building up the reputation of the school. Tell us about the Sciath na Scol? We qualified for the 2014 Football Final v Leamlara National School. It was a great achievement to get to the final and we had some near misses along the way. Vicarstown has had some very good players over the years and some years we were very unlucky not to reach the final, the matches were always very exciting in both Hurling and Football. It is a great achievement to be in the 9 aside football competition final. We have enjoyed great support from Inniscarra GAA and their schools coach Don Hennessy. What is your hope for the future? Well as you know I got married over the summer in Galway to Caitriona. Caitriona is from Kilkenny and her father is from Freemount, County Cork. I am looking forward to the new challenge in St. Annin’s National School Rosscahill, Co. Galway, it is different type of role as an Administrative Principal and I look forward to starting. How do you feel about leaving your Children’s officer post and Rebel-Og Chair in the GAA and do you hope to return/will you get involved in the GAA in Galway? I will be a little bit sad leaving them, the whole experience has been tremendously enjoyable and demanding. It was great to be involved with the reorganisation of the underage structures and the establishment of Rebel Og and also to be involved with promoting good practice in terms of child protection procedures in the role of Children’s Officer. Have you got anything further to add? I have been very grateful to the staff in Vicarstown National School. I am also very grateful to the Parish of Inniscarra. I have been very fortunate to have worked with Siobhan Looney from my first day in Vicarstown and all of the teachers, Bernie O’Sullivan, Fr. Lomansey, Fr. McDermott, Fr. Coakley and the Local Community Cards Group. 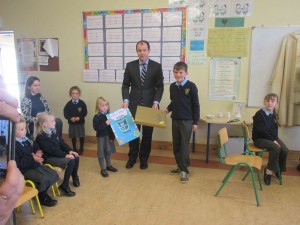